You’d think we’d be moving on to other things.  At least that’s what I assumed would happen.

On Sunday afternoon we watched the very end of the bobsledding finals and then about 20 minutes of highlights from the games.  I can’t help but cry when there are emotional images put to music.  It struck Philip, too.  Keeping his eyes glued to the screen, he choked out, “It’s – just – so hard – to know – it’s over!” Then he saw the tears on my face and came close to completely losing it.  Ellie’s eyes turned large and round and she panicked.  “Max is MISSING it!” she yelled frantically and ran up the stairs.  She was sobbing before she had reached the top.  There were ragged breaths when she returned and halting words.

We were a mess.

There were even more tears after we saw Mischa bear cry in the closing ceremonies.  Four more years?  How could we endure it?

It seems they devised a plan together without even discussing it.  We woke to snow and it was decided at once that they must begin training for their Olympics.  Skeleton, Luge, Spinner Sled – they ran and reran them until they couldn’t feel their feet or hands.  In they came, leaving coats and boots and snow in their wake.  Almost immediately, they changed into “costumes” for their skating programs.  Ellie requested “I Dreamed a Dream” from Les Mis and Tess fretted over her music selection.  Somehow Ellie and Philip quietly paired up and seriously worked out their routine.  Max and Tess, contentious as always, argued loudly about their artistic differences and yet pressed on, devising complicated lifts and cantilevered poses.  When they tired of that, they stripped their costumes off and found clean socks (because all FOUR pairs Philip had on were damp with snow) to “skate” in.  Short track speed skating was next and over and over they raced around and through the kitchen.

For 3 weeks we have studied Russia and the Olympics and they’ve enjoyed it.  But now that it’s over and it seems that it’s up to them to keep the spirit alive, they are the most passionate.

We’ll enjoy it while it lasts! 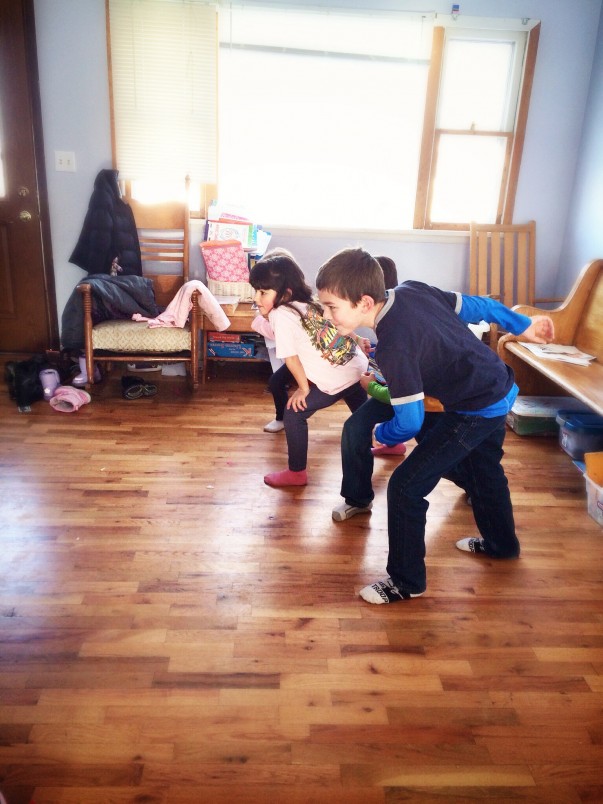