For all of our lack of planning for Lucy’s arrival, one thing was abundantly clear:  I would take a full six weeks to do nothing after she arrived. I said it about schooling, at church, about Scouts, about everything.  But then she came and I felt better than I have in months and felt myself gearing up.

On Tuesday as we chatted in the quiet before kids woke up, Jac wondered what the day would look like.  It was the first day he would be back to work leaving me alone with the kids. I could tell he was concerned and anxious.

“I was just planning on you going to work and us trying to get back into a routine around here.”  I smiled breezily. “It’s going to be fine!”

Sometimes God is just sooo funny.  He pulled the plug on those plans and reminded us of the original six week hiatus.

Before 9:30 am, water was dripping from the fan in the girls’ room.  This requiured hauling the ladder in and a tip into the attic to investigate.  Gemma’s diaper reached capacity and didn’t hold resulting in all the contents of her crib needing to be washed forcing the loads of clothes that needed to be washed into waiting.

That night, while the boys were at Scouts and the girls were on a field trip (thanks, Wingert’s!), Monday feasted on a newborn diaper on our bed.

We hoped for sleep and a fresh start in the morning.  The next day wasn’t much better.

And today?  Today was just a hangover from last night in which there wasn’t a whole lot of sleep but there was an awful lot of nursing and baby barf.  Ellie came crashing in sometime after 5 but before the sun with an LED shop light straight in my eyes. “I had a scary dream!” was hollered at full volume. We prayed a St. Michael prayer and sent her reluctantly back to bed. Lucy and I watched the sun rise. We finally drifted off to sleep only to be awakened by Gemma’s piercing, angry screams.  She had committed an abomination in the bathroom and had been caught.  Oh, the indignation!  After Jac had headed to work, I began to dress Gemma.  I had gotten her completely stripped when Monday, on watch outside, lost her mind.  The house across the street is for sale and a potential buyer had parked in front of our house.  Monday barked and tried going over the fence while I chased after her.  She tore around the yard doing her best impersonation of a guard dog and completely ignoring me.  Just as I was catching her, Gemma was alighting down the steps in her birthday suit while Max lost his breath laughing.

“Get her inside, please!” I begged. No sooner had they disappeared inside than I heard Philip say, “No, Gemma!  Those are dirty!” and then a crash.  She had grabbed Tess’s painted pottery plate and then dropped it.

The kids stood in stunned silence around the broken shards.

Later, as we attempted an art project, Gemma was either screaming in her room or eating crayons.  Eating them.

By lunch, I was feeling frayed and frazzled.  God was good to send Jac up to handle lunch prep and I could very nearly taste the wonderful nap that would commence. That is until I said, “Nap time!” and Lucy promptly woke up.

Tonight, as I write this, the girls are running through the house, screaming their screams and laughing their laughs.  And I can laugh, too.  Why did I think that at 2 weeks in we could even attempt something close to normalcy?

Six weeks will arrive right before Christmas.  As she held the baby the other night, Gail suggested an extension to the first of the year. I think I’ll take it.  Who needs a routine anyway? 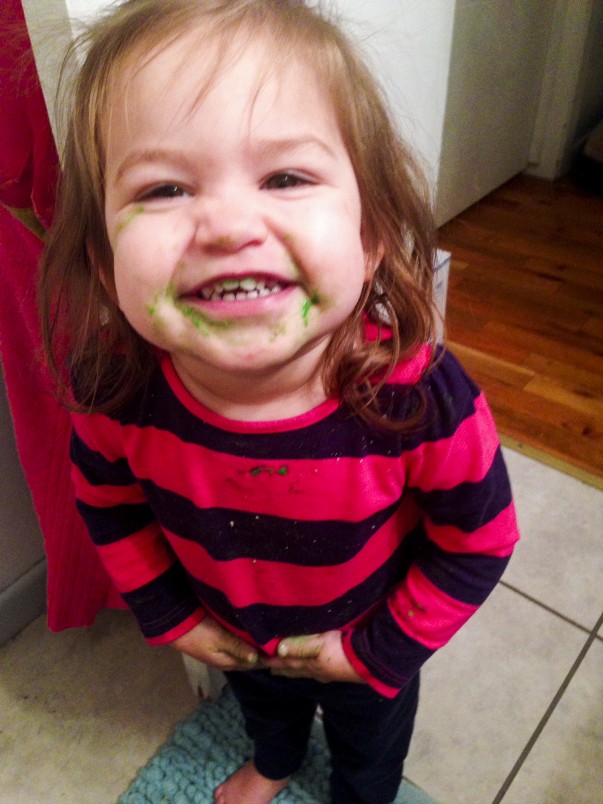