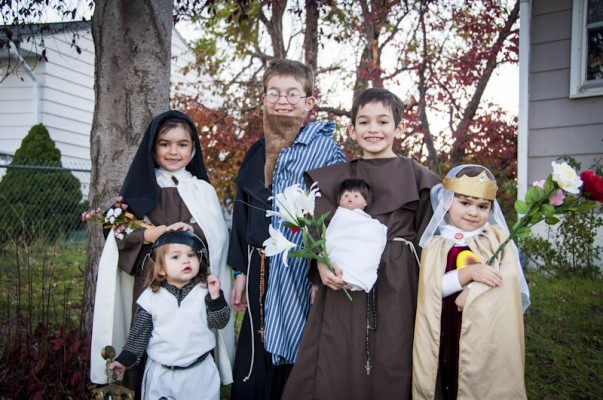 NOW the baby can come.

I’m a procrastinator – I’ve been working on it for years.  There are a number of reasons why I am unconvinced I’m really having a baby, but that’s the cold, hard truth of the moment.  I’ve decided that the spurts of contractions that have put me in a panicked cold sweat were God’s way of kicking my procrastinating tail into gear.  It was just a few Saturdays ago when I got out of bed after a looooong night of contractions and just felt off.  I was grim and rather wild-eyed.  Jac regarded me from a distance and inquired about my thoughts for the day.  I bewailed how I wasn’t ready because the costumes weren’t done.  So, if you are in labor, you should go to the fabric store and pick up 10+ yards of fabric, obviously.

It sat in the Suburban for a week.  Then I had to research cowls and coifs, habits and head-coverings.

If there is ever a time I wish for a religious (alright, habited religious) community in these parts, it’s in October.  If only I could ask a sister how the heck her coif fits or how to attach a veil, life would be so much easier.

As it was, I researched and researched and in the end drafted my own patterns, wobbly though they were. “Um, is it supposed to be all wiggly waggly?” Tess fretted as I cut out her robe.  She almost didn’t get a costume . . .

Adding to the time crunch pressure was the fact that this year nearly all the parts and pieces needed to be made.  No reruns or pre-made ready to recycle pieces.  For five kiddos, that’s a LOT of sewing.  Sewing with a busty pelvis and a too-busy toddler.

It nearly did me in.

HOWEVER, God is good and we made it through it.  There was only the threat of tears twice ( First when Jac laughed at my lack of math skills.  We both ended up holding our heads and ruing each and every wasted second of any math class we ever took.  True story. Second when it was midnight on Thursday and I needed to lie down and had so much left to do and knew that my kids were getting ulcers over it right along with me.). Tess and Max both had some sleepless nights worrying if things would be completed but it was advantageous in the end as it meant they were super helpful during the day so I could be working.  Nothing like a little motivation, I say!

I really do love making the costumes for the kiddos and I will enjoy it while I can.  Soon, I am sure, they will take over the duties for themselves and their siblings (glorious day!).  The boys have already asked if they can handle theirs next year and as it was, Max did most of Gemma’s this year.  While  everyone planned their outifits down to the smallest detail, we just sort of figured we’d find a hand-me-down for Gem.  Where was the bear suit?  Could she be baby Jesus for Philip’s St. Anthony?  Wasn’t the dove an 18 month size?  What about that angel costume?  I tell you what, though, when Max dug out the chain mail shirt and tried it on her with a sword and shield, it was apparent she was MEANT to be Joan of Arc.  Or “Nona” as she says.  I whipped up a tunic at the last possible minute but her brother found all the other pieces and dressed her.  She’s particularly fond of the sword as she can throw it and get a laugh from the crew e-v-e-r-y time. 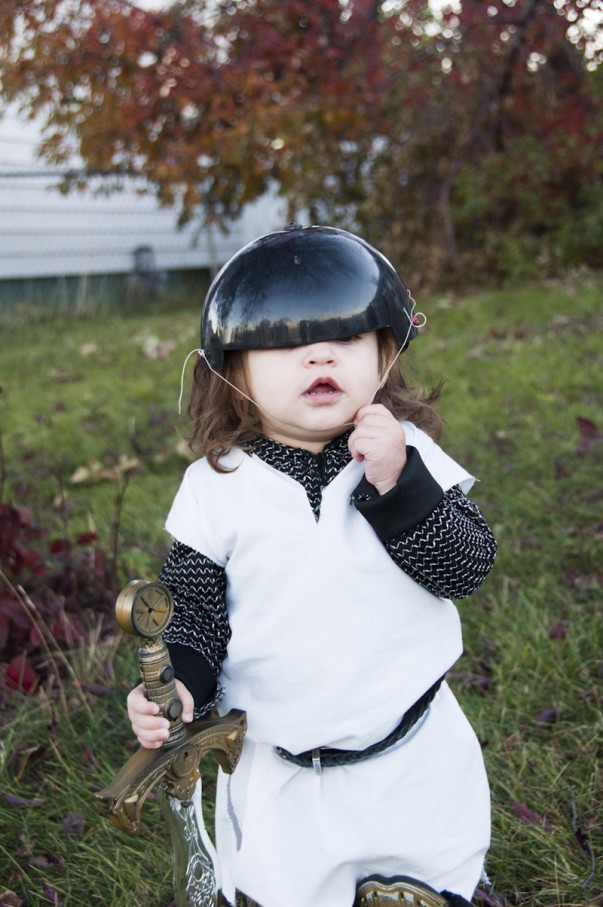 So yes, the costumes are done.  Susan and Bridget are on deck to take everyone trick or treating Thursday, come what may.  Gail will haul them to Custer for the All Saints Day party and Mama Syd will get to see them in costume in person.

St. Maximilian Kolbe (He requested from me a habit.  The beard, glasses, and Maximilian’s prison uniform were his ideas.  I love how that kid thinks.) 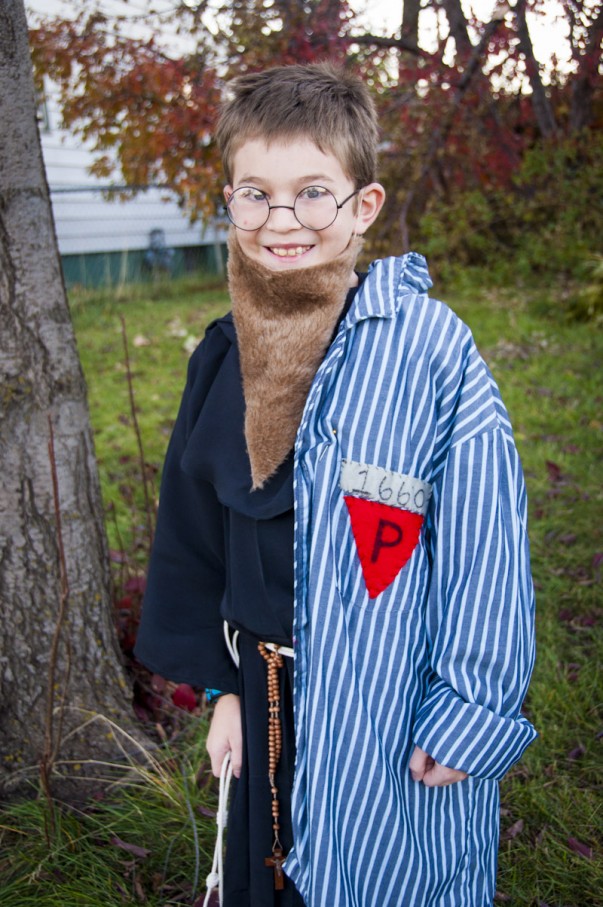 St. Anthony of Padua (One of his favorites.  He was so excited to find and carry the lily and stoked about Ellie loaning him Christmas Tree St. Louis [“I switched my baby’s name to Jesus for just this.” she said] as Jesus.  “I could hold this pose for a long time.” Philip assured me.) 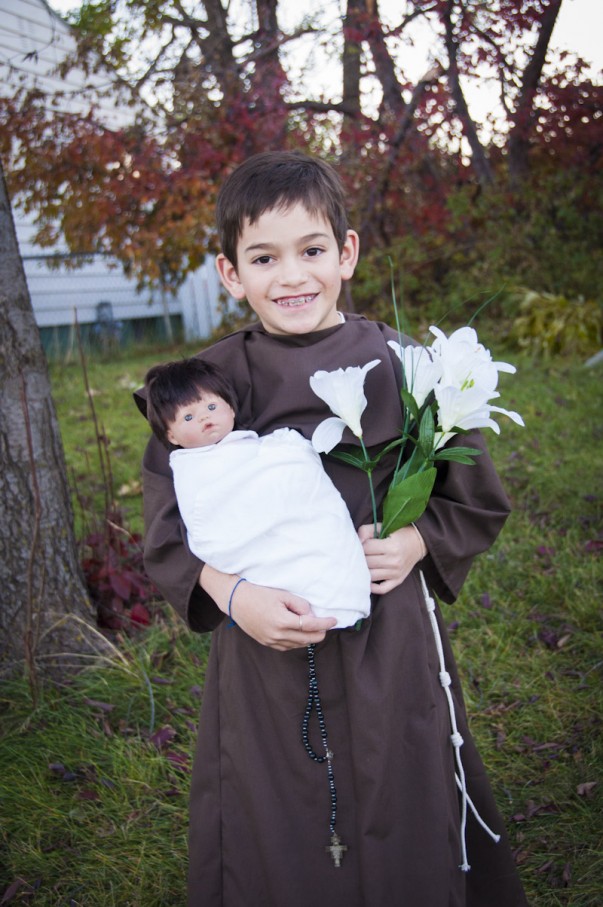 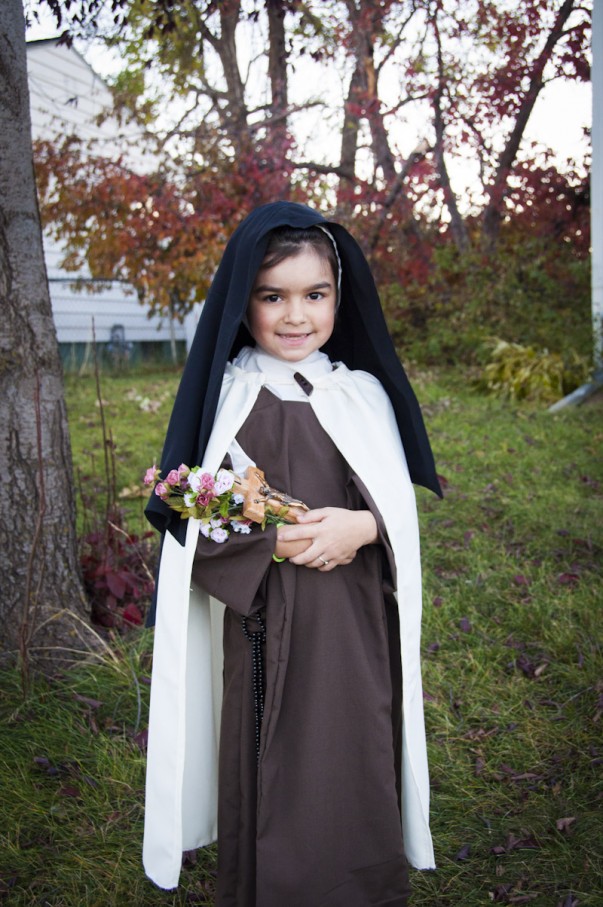 St. Elizabeth of Hungary (She also wanted to be her name saint and has been gloating all over the place that she is “QUEEN Elizabeth.”  She helped Jac make her crown and once it was on her head, she was regal indeed. It only slightly annoyed her sister.)

St. Joan of Arc (All it took was one tootsie roll in her pumpkin to convince her that Trick of Treating was the best thing ever.  We listened to a solid 30 minutes of her jumping in her crib and yelling “Tan-DY! Tan-DY!” before she wore herself out and fell asleep.  She managed to climb on top of the piano to get to it first thing in the morning, too.) 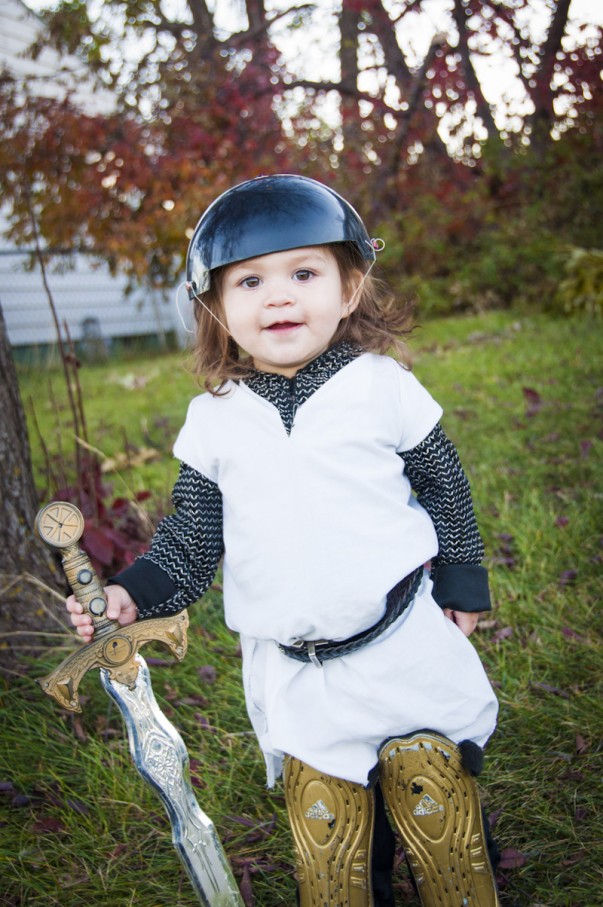