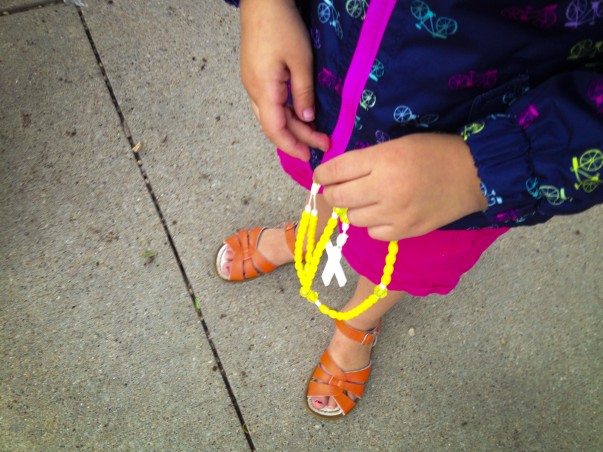 We are THAT family.

The kind that trots out their whole troop of kids to stand on a street corner and protest for religious freedom.  We use our rosaries and hold signs and listen to a priest on a bull horn.

Every Friday as strangers whiz past in their cars, averting their eyes or searching the crowd for familiar faces, I want to reassure them, “I know!  I don’t recognize us either!”  Because I don’t.  However, I also want to yell and throw tea chests and burn effigies because I can and others before us have. But I don’t. Instead, I pray and sometimes cry when everyone sings the Battle Hymn of the Republic and try to keep my daughters from dancing into the traffic of Main St.

We are that family.

We are THIS country.

I remember quite well watching in stunned silence as our armed forces invaded Iraq.  I was 8 months pregnant with Max and every chair in the Newman Center was filled with wide-eyed students and friends.  Some hugged their knees to their chests on the floor and others stood motionless.  We thought of Jac’s brother in the Air Force and knew he would be among the first in. (He was.) We thought of the students we ministered to who were ROTC.  Would they ship out? (They did.) And I thought of our child and how war would impact him.

Max is ten now.  We have watched friends and acquaintances be deployed to the Middle East and -thanks be to God- return home again for his entire life.  Living in a city that is home to a National Guard base and an Air Force base, send offs and homecomings are a regular part of life.  We weren’t voted the Most Patriotic Town in America for nothing, folks.

Max is ten now.  We discuss Syria on a daily basis.  We untangle the history of the region for them and for ourselves even as we learn about Cyrus the Great and the Persians and Assyrians and Babylonians in History.  Max pours over the newspaper in the morning, checking for updates and he asks questions and we try to answer them.

Max is TEN now and I pale at the thought of watching an invasion beside him.  I, too, am pregnant again and wonder about this child.  My stomach drops at the knowledge of Russian war ships moving into position beside our own.  Of crazy dictators threatening and posturing.  Of children, just like mine, homeless, displaced and hungry because we know they are and there will be more.

Now I am this person:

Pope Francis has called for a day of fasting and prayer for peace in Syria on September 7th. From everyone.

“. . . I also invite each person, including our fellow Christians, followers of other religions and all men of good will, to participate, in whatever way they can, in this initiative.”

All men of goodwill.

Is that you, too?

Fasting and prayer is powerful and rather easy to do.  The actual, concrete guidelines say fasting is two small meals that are not, when combined, equal in size to your third meal.  If you’re hard core you can do bread and water from Friday night until Saturday night.  Or if you’re like me and unable to fulfill the physical fast (the food will keep coming, Sixtus!), you can abstain from something enjoyable OR take on something difficult.  I’m fasting from my phone on Saturday – no Facebook, texts, pinterest, internet . . . nothing. It will be hard but when I reach for my phone or a stomach growls, that’s when we pray.  All day, in the midst of everything we do, we will pray.  At the bridal shower and the day-long conference and as we clean and work and rest and play WE WILL PRAY. For peace, for the people of Syria, for our politicians and for wisdom.

We are that family, this country, and, not to be too Michael Jackson, the world.  We’re all in this together. Won’t you join me?