On Fear and Bravery

It began before we left for California, Ellie’s fear.

Or fears, really. A bug, or what could pass as one, on the inside of a window was terrifying. Screams, shakes, convulsions . . . she’d turn on the works. Sometimes it would set in while playing – if someone pushed her too fast or spun her too much, it was all over.

I was sympathetic but that didn’t always translate well.  I was pained for her but impatient at the ridiculousness at the same time.  In all actuality, it just struck a little too close to home.

I was a very, very scared child.  It doesn’t take much fear to make a person react in crazy ways but a dash of fear combined with heaps of anxiety and worry can be downright destructive. Take for example the year I was five.  That was the second year we went to the reservation for mission work.  The grasshoppers were the most horrifying thing in the world and they were EVE-RY-WHEEEEERE. One day we went down to the river through grass that was taller than I was.  For whatever reason, my parents weren’t with us and on the hike up out of the river valley the terror set in.  I was afraid to move because the enormous grasshoppers would claw onto my clothes and arms, leaving spit trails.  They stuck in my hair and buzzed all around us.  I panicked and the adult that was with us had zero tolerance for my reaction.  She told me to knock it off, to get over it.  She threatened to leave me.  The kids offered to piggy-back me out of there but she told them no.  And then, they all walked away.

I remember screaming and throwing an absolute fit and deciding, at some point, to run.

Not one of my finer moments.

BUT, that’s what I would see and feel when I would see Ellie’s fear and folks, seeing your weaknesses played out in your children is the worst kind of torture.

I tried to keep triggers at bay for her because attempting to reason away stark terror, in my own experience, doesn’t work.  We walked through the grass so she didn’t have to worry about seeing the ants on the steps. We killed bugs inside and no one was allowed to touch her if she was riding on anything.

Then we got to California and she started throwing curveballs.  How would we know she’d flip out at the sight of a man in the stocks at the Highland games and refuse to move?  We couldn’t predict that the thought of walking towards the ocean would induce her to scream “Daddy!! Daddy!!! NOOOOOOO!!!” like she was being abused.  Who knew a photo op at the Grand Canyon would become a “thing”? And how do you plug all of those holes?

In short, you don’t.  We prayed for courage.  We applauded her bravery (“Yay!!! You used the outhouse and didn’t cry!!!) and pushed her a time or two.  When we introduced the AlleyCat tow bike to her I knew for certain she would balk.  She did, complete with screams and tears but it was moving and try as she might, she couldn’t bail. It was all it took and she stared that fear in the face and bit it’s ear off. We had a hard time keeping her off the bike after that.

She’s had moments since but our girl is learning to steel herself.  She takes things at her own pace and knows when enough is enough. I applaud her for that and keep praying for more courage and strength – for both of us. 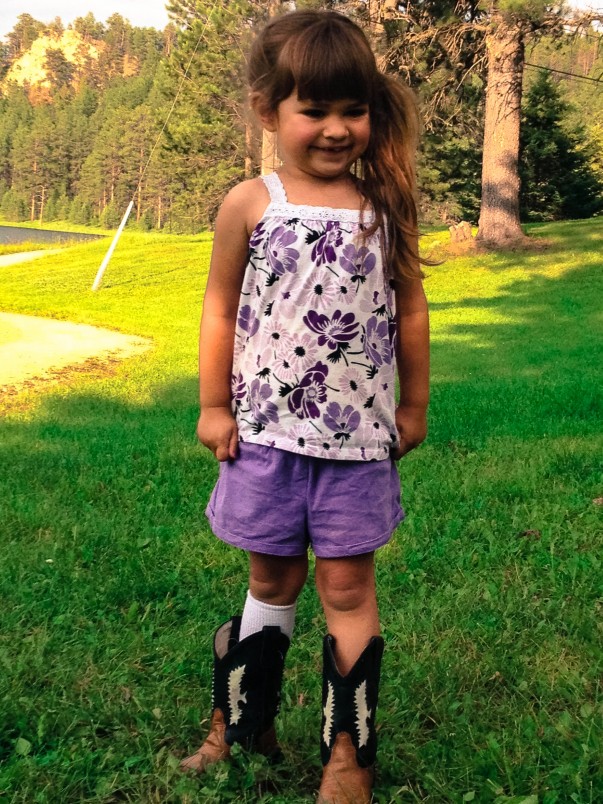 In other news, she does seem to be fearless about her fashion choices.