Here’s Milk In Your Eye 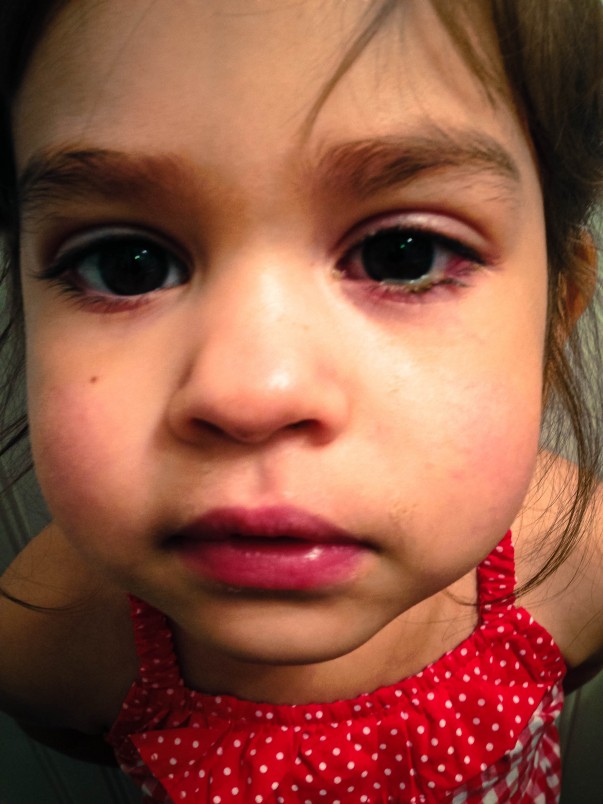 When Gemma was born – at home – we had a long list of items to get in preparation.

10 towels, 8 washcloths,3 blankets, thermometer, rubbing alcohol . . . the list went on and on.  Among the many items were several prescriptions that needed to be filled for me and the wee babe.  Erythromycin in eye drop form was on the list.  “If the baby isn’t in the bag of waters, we need to have it on hand.  And if it is,” Jeanne shrugged, “well, it’s good to keep on hand for pink eye in the other kids.”

In our many trips to California we have learned that 1. SOMEONE is bound to get sick 2. Traveling between here and there exposes us to many more petrie dishes than we are used to and 3. It is always better to be over prepared than under.

The breathing machine and the meds get packed.  Dramamine and benadryl, claritin for adults and kids all go.  Pain meds, fever meds, cough, sneeze and sniff syrups all make the cut in addition to antacids, teething gels (day and night formulas!), diaper rash creams, homeopathic concoctions, supplements and cough drops.  We know we can purchase things there – and we do! – but it’s nice to have things at 3:47 am when they strike.

This time, in addition to Jac catching a viral and allergy crud, the two littlest ladies grew a fine crop of conjunctivitis.

Wouldn’t you know, that very handy bottle of erythromycin was left sitting very lonely in our very empty medicine drawer.

This has happened before, with the goopey eyes.  So often that we have used up Mama Syd’s and Cindy’s stash of eye drops.  (Does everyone hoard prescription meds?  No?  Just us?)

We frantically cleaned weepy eyes for a few days and hoped things would get better.  But then eyes started to swell and I was embarrassed to venture out with my Pink-eyed Pete’s.

We called Dr. Jon in Rapid for a favor.  Could we pleeeeease, pretty please? get a prescription for the girls? He was very kind and accommodating and we were thankful and relieved.

Until we picked up the meds.

When Philip was 10 months old, he came down with pink eye.  We, green and eager parents that we were (how things have changed!), whisked him to the urgent care and emerged with sulfa based drops.  The first drop of the 3 in each eye I was supposed to give every 4 hours was easy but then there was the most painful screaming . . . *shudder* It was awful.  I called Jac and over Philip’s screaming cried to him that I was sure I was torturing our son.  “It has to be done.” he said.  I cried some more and set the timer for the next dose.

By the time we came home that night – it was a youth night – Philip’s eyes had swollen shut.  He was cheerful though blindly creeping his way along the couch.  My mother-in-law was worried – it didn’t seem right.  I agreed and Jac took over the last dose of the day while I tried to find a place in the house to hide from the screaming.

I awoke in the morning to a peacefully sleeping babe with bleeding eyes.  To say I panicked is a gross understatement. When Philip woke up, he couldn’t open his eyes and there was a lot of crying from both of us.

When we arrived back at the urgent care, the Dr. took one look at him and asked which medication he had been given.  “Oh, yeah,” he said, scribbling hurriedly on his script pad, “That’s a sulfa allergy for sure.  DO NOT give him any more of those drops – they are making him miserable.  Does he have any siblings?  Don’t give them to them either.  In fact, do not, for any reason ever give him or them anything sulfa based.  EVER. Here’s a new script.”

So, back to CA, we were conflicted. We had a very generous prescription of sulfa drops. The girls were miserable, would this make them more so?  We didn’t want to harass Dr. Jon again. Was it worth the risk?

In the end, we decided to try it and use Ellie as our test subject.  We figured that she has the language skills to communicate if the drops were burning like the fire of a thousand suns or causing her to want to scratch her face off.  Well . . .  the theory was good, the execution not so much.  The drops went in and the screaming rose.  It was unclear if it was the medicine or just the act something going in her eye (she has a thing).  By the end of the second day when both girl’s eyes were looking rather bruised and battered and Ellie was fighting like a mountain lion complete with scratching and kicking and blood curdling “NO! NO! Mommy DOOOOON’T!” we reassessed.

We took to google.

We knew that breast milk would be useful but everyone was clean out.  Next option.

Well, what do you know?  We just so happened to know a dairyman!  Cindy dropped by for some reason and we asked if we could mooch some milk.  She assured us that the stuff in her fridge probably wasn’t so fresh, but we could go straight to the source.

Ivan met us at the milking barn where I handed him a very tiny canning jar.

“Well, shoot, why didn’t you bring something to put some milk in?  This is nothing!” We told him it would be plenty as he opened the spigot on the tank, pure white heavy milk filling the jar to brimming.

Ellie was skeptical.  Everyone was.  But it was that or the drops and so in went the milk.  She still hollered, mainly on principal, but within a day her eyes were looking better and she was wanting to put the milk in her own eyes.

Dr. Jon called to check up on the girls.  We explained the whole situation and he said whatever worked and not to keep them out of the pool as the chlorine would help, too.  Huh!

And that’s the story of pink eye and white milk during our trip to California.

*Thanks again to Dr. Jon and Ivan for their help.  We also read that honey can be healing but it sounds sticky.