First, let’s address your name: Don’t worry, we’re not planning on letting it stick. But it’s nice to have a title for you and it’s fitting.

Second, we all got to see you for the first time today. I have been stressed out over this appointment for a good month, so worried that something might be wrong. We still don’t, really, but seeing you quieted the fears. There you were, in black and white, snug as a bug and dancing away. You kicked and stretched and squirmed, showing off for your brothers and sisters.

They were lucky they were there. We got home at 9:30 last night and after reaquinting themselves with the house and unpacking and bedtime, they were wound up. They chatted and giggled past midnight. That meant that this morning was slow and cranky. I almost left them all at home. They pulled themselves together though, in spite of my crabbiness and we all made it to the office.

The tech was a little terse.  I don’t think she appreciated an audience.  No matter because showing you to us was her job and she was dutiful if a little grouchy. (It must have been a case of the Mondays all the way around. . .) Within seconds, you made your debut.

You showed your face and waved your hands.  You arched your back and presented your feet for view.  You were wiley (Lord help us!) and hard to capture but we found it breathtaking.  Those feet of yours are 3.5 cms at the moment.  You weigh in at 1lb 1oz.  It’s still plenty early but this breech position you’re in can’t become permanent, okay?  Get used to that thought. 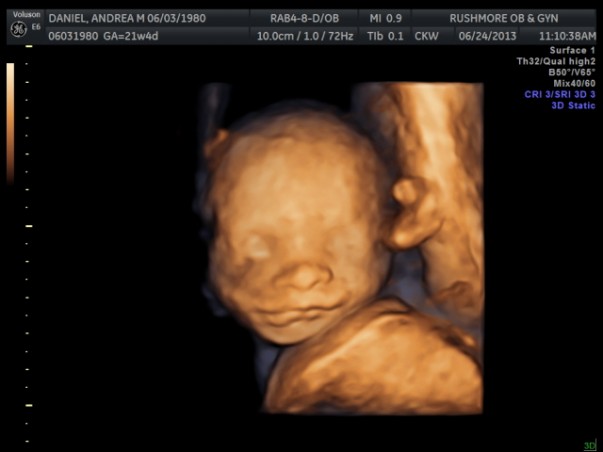