This story begins with our friends the Yantes.  Remember back in August when they gave us The Okee Dokee Brother’s CD? Now the Brother’s are Grammy winners and we are sampling their other albums.  Top of the list at the moment is Take it Outside.  There are numerous catchy tunes and singable songs and it’s the most requested – next to the Original London Cast 7 Brides for 7 Brothers, obviously – recording. Good stuff, I’m telling ya.

The second part of this story involves the Wingert’s.  Gail asked me over to speak to a group of homeschooled girls about the vocation of marriage (God is so funny sometimes . . . ) and I arrived early.  I found her and her 2 youngest and Dr. John playing Bananagrams.  “We ran out of time for spelling this morning so . . . ” she explained and I was immediately sold on the sheer genius of the idea.

The next morning, I ordered the kids to find our Bananagram game.  “It’s in the downstairs closet!” I repeated at least a dozen times. They protested it wasn’t. “Did you look in the bag?’ I would holler down the stairs.  There would be some thumping and bumping and giggling and then a negative response.  “Check again!”  Rinse, repeat for 45 minutes.  (They are persistent, I’ll give ’em that.) They were still rearranging  when I thought I’d check the school baskets upstairs.  Viola!  There it was!  They weren’t as excited by my discovery as I was.  They seemed slightly annoyed, even.

Since then, we have played Bananagrams several times a day.  I have been impressed with the spelling skills of the oldest three (we don’t do “spelling.” Raise your hand if you’re an unschooler!) and the word recognition Ellie possesses.  Yes, there is still a good deal of assistance, but we can actually play a real game.

Philip, as noted before, has mad spelling skills.  He makes words like ‘lavender’, ‘Arizona’, and ‘Saruman’. However, he tends to get single minded.  He will dump and draw until he has all of the extra tiles just to find a specific letter. “I just need a B/F/L/ two N’s!”  this rule following Mama?  Well, I don’t like it.

This morning, the rules were clear – No dumping unless necessary.  He stared agape at me. “But . . . !” NYET!  Rules! Play commenced.  Max toiled away at his pile until he won while Philip arranged and rearranged and sang.  Suddenly he stopped and requested an Okee Dokee song.

“I just want to look at the screen while I listen though.”

And with a little help from my pile and Tess’s for a few S’s and an N, he had enough of the right letters to spell it. 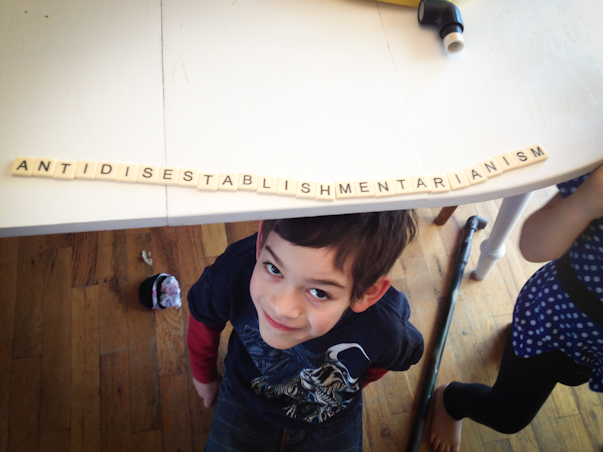 Yes, that’s ANTIDISESTABLISHMENTARIANISM. I call it winning in homeschool for oh-so-many reasons.

He’s told everyone we’ve seen today (it was a big day with guests for lunch and Terra Sancta for the Year of Faith conference) about this feat of skill.  I doubt anyone has been as impressed as he and I were.  No matter.  And tonight as they were tucked into bed I heard singing from the boys’ room over the giggles from the girls’ room.  I stuck my head out and it was clear – they were singing the song and even beat boxing the drummy parts.

Because you want to know how this word can be used in a song and get it stuck in your head too, here it is.