Gemma turned one just as the stress and crush that defined our December came to a fine point. We lacked the time and energy to muster a real party, but the world turned on regardless.

The kids planned big plans and laid large dreams.  We sat them down and patiently explained how and why this birthday would look different from theirs.  We would not have a day-long celebration as she would lack the endurance.  There would be no movie as she would not enjoy one. There would be no guests because of the holidays (“What?  It will be just US?!” Tess was incredulous.)  There might not even be a cake because of the dairy. There was a long moment of silence and blinking eyes.

“Buuuut, there will be presents, right?”

In the end we put her in a fancy dress, cooked up some stir fry (her fave) and rice, slapped together a party hat and celebrated.  We rejoiced in the joy she’s brought us and celebrated all of her achievements.  The birthday girl reveled in her glory though she was unfazed by the attention – she always has plenty of that. She chatted and made faces and kept everyone in stitches including herself.

After dinner we presented her with brownies and a creamy, hydrogenated oil frosting-esque substance while we sang.  The candle did not receive even a passing glance when there was frosting to discover!  Her siblings tried to coach then coax her to blow, but in the end took care of it for her- its just so hard to blow with your mouthful! 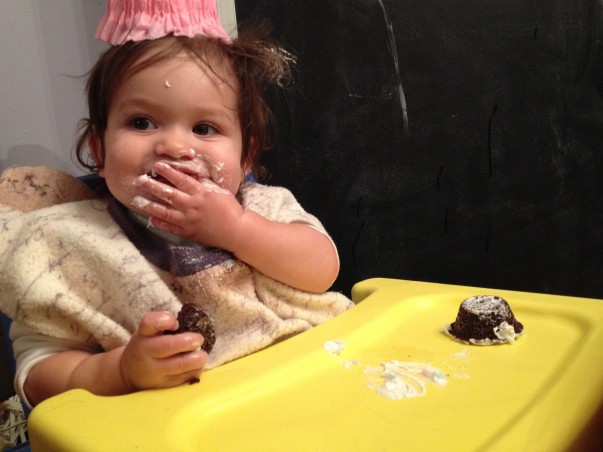 There was a stack of presents and she chose a book from the Witte’s as the first and upon inspection, would have been satisfied if it had been her only.  We confiscated it and forced her to open two more but it was an unpleasant business. We returned the book to her, let her siblings open the remaining gifts and everyone was happy.

Low key and simple, it was fittingly Gemma. Max summed it up best while he watched her eat cake,

“Now I know what they mean when they say ‘Their eyes sparkle’!”