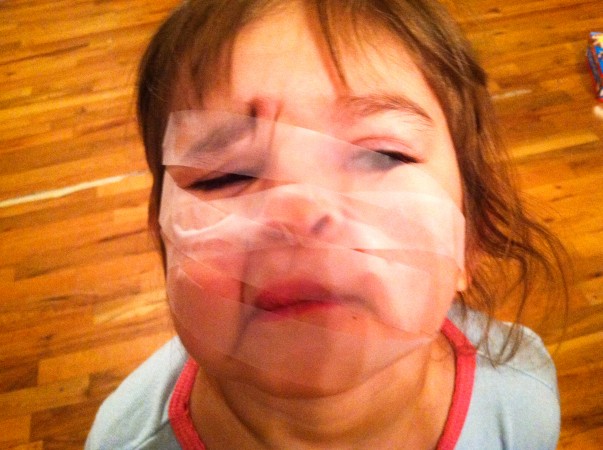 Permit me one more Les Mis post.  It’s been all encompassing in these parts it seems. . .

Really, it has seeped into our cracks and crevices.  We sing the songs all of the time. Max’s name on a video game is ‘24601’. Unprompted, unprovoked, they discuss the plot on a regular basis (Hugo’s original text, not the musical . . . so much . . .) References are made on a regular basis, a la:

Tess: “No, not Nana Mickey.  Nana Joyce.” Ellie: “Yeah, ’cause Nana Joyce got sick and passed away like Fantine.”

On Sunday some dear, dear (and generous!) friends invited us up to for lunch after Mass.  Just like that – see us after Mass, ask if we had plans and invite us up.  For roast beef.  And homemade bread.

*sigh*  That was some gravy.

After lunch, the kids disappeared downstairs while we leaned back with hot coffee and cheesecake. Then there was a scream.  A mighty, ear splitting scream that I knew meant blood.

Rose brought a shrieking, bleeding Ellie quickly up the stairs and I hauled her to the bathroom and called for Jac.  We both balked at the thought of looking at the mess that was her mouth.  Gail came to our rescue by calling her husband – doctor John – to take a peek and he saved the day and was calm and collected.  But it didn’t look good.

We iced.  We attempted to calm her and keep her that way.  The  bleeding wouldn’t stop.

In the end, she was over the moon about going to the dentist but was sorely (pun!) disappointed when they pulled the tooth. That’s correct, the right front tooth had been knocked out of the socket and needed to be removed.

Later that evening, she was moping a bit and I said “You’re just like Fantine!” She brightened.  “That’s right!  Do you think she was brave like me?  Was she courageous?  Did she scream?  And maybe cry?”  I assured her it was so and gave her a kiss before she bounced off.