On the ‘winner” list of books from the library this year, is this title: 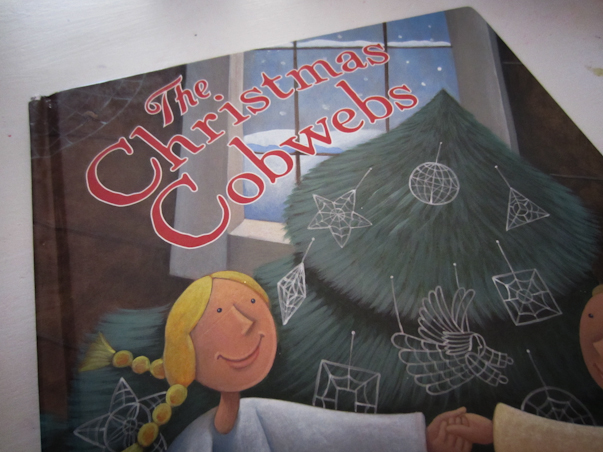 I won’t give anything away, but it is a beautiful lesson in the Golden Rule, tradition, family, God’s provision – really, anything you could want and more. The kids came back to it again and again and we read it numerous times.

For days I wondered how to make web ornaments with them, then finally decided, the morning the book was opened *ahem!* on spiders instead.  The crowd was leery.  The boys have recently learned the meaning of “Arachnophobia” and have become self-proclaimed ‘phobes after some personal run-ins and an unfortuunate Bugs Bunny episode viewed at Grandma’s house.  The last thing they thought they wanted to do was make spiders and they whipped themselves and their sisters into a fine frenzy at the suggestion.  We soldiered on.  Oh, how we soldiered on.

Before they knew it, they were having a good time.  Not even  just good, they were actually enjoying themselves in spite of themselves.  Oh, sweet consolation of being right now and again!

We had such a good time making our spiders, we thought we’d share our process with you.  You know, just in case your tree doesn’t have a spider.

1. First we selected 4 straws that coordinated with the  bodies.  We used what was on hand, so color choices were very narrow. Then we cut each straw into 6 segments, roughly about an inch and a quarter or so. 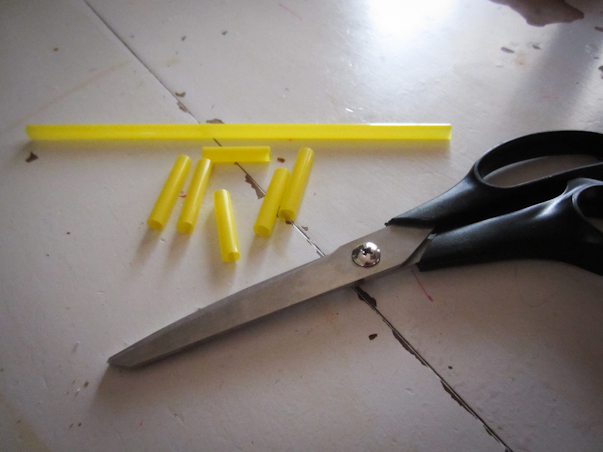 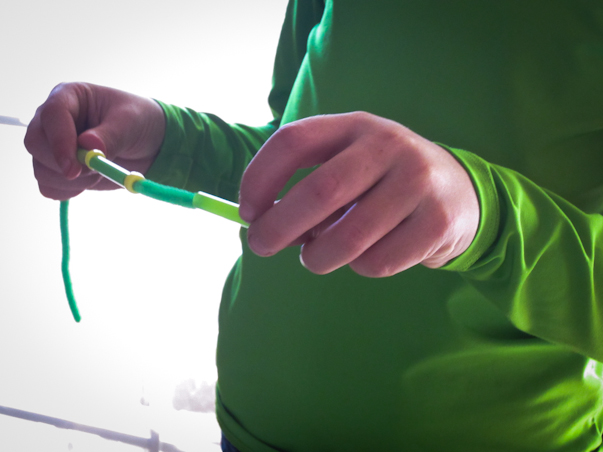 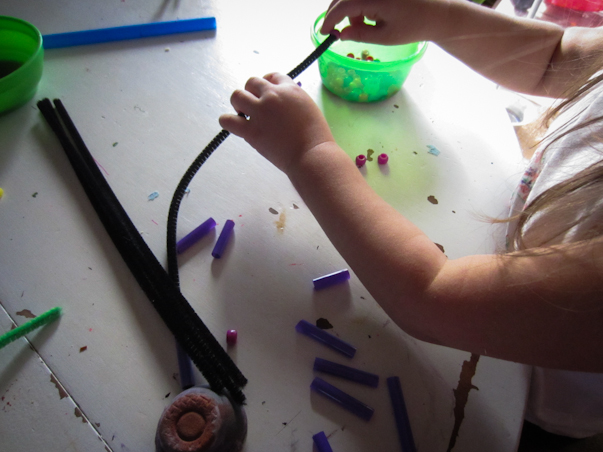 4. Then we let our ‘helper’ crawl on the table.  This is an unnecessary step, FYI. 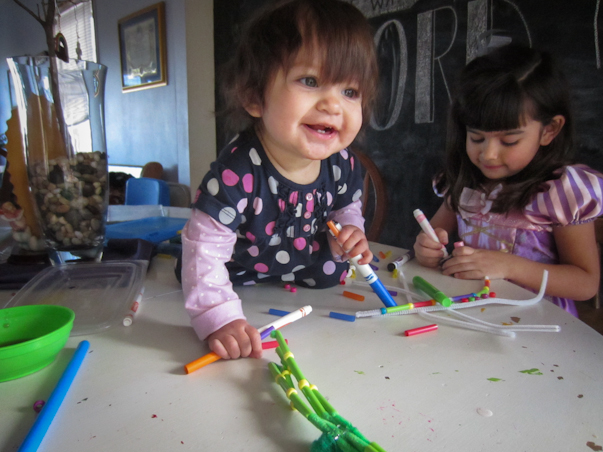 I turned the big kids (the oldest three) loose with the glue gun for the first time.  This was a VERY. BIG. DEAL. for them.  And, best of all, no one got burned but me and I did it to myself.  Impressive.

5. With the hot glue, we attached the small pompom (the ‘head’) to the large pompom (the ‘body). We waited a few seconds for the glue to dry and then set to work inspecting our spiders for their top and bottom sides. 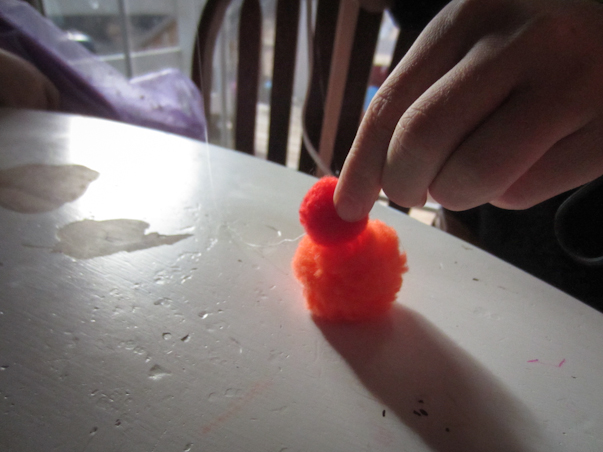 6. Once we found their ‘bottom’ side (or bellies, more accurately), we prepared to attach the legs.  Each pipe cleaner had two halves with 3 straws and 2 beads on either side of a good 2 inch space.  With that ready, they laid down a thick strip of glue and pressed the’ space’section of each leg to the glue, careful not to burn themselves. 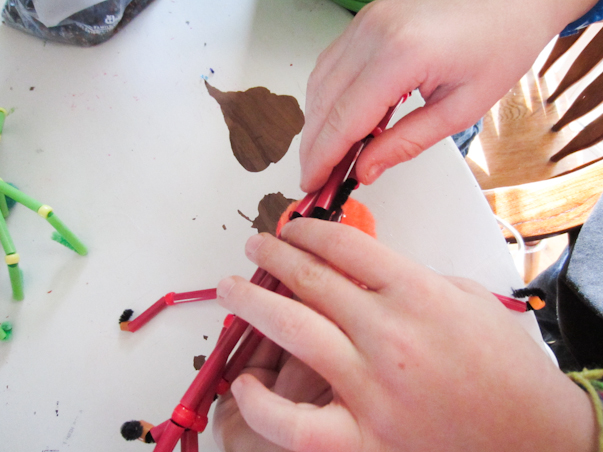 7. After the glue set, we turned our spidies over and, with one hand firmly on the spiders back, we gently pulled each leg directly up towards the ceiling. Then, at the bead ‘joint’ closest to the body on each leg, we bent the leg back down.  At the second bead, we bent the leg even closer in. They strated to look like th real deal! 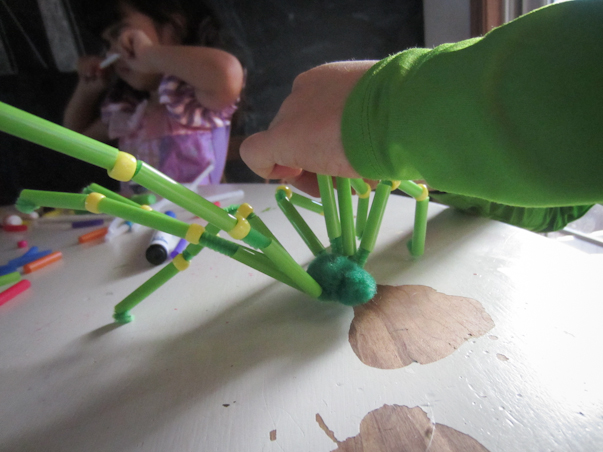 8. At this point, some of the kids chose seed beads or googly eyes to glue on for the face.  It really brought out the spidey’s personality. 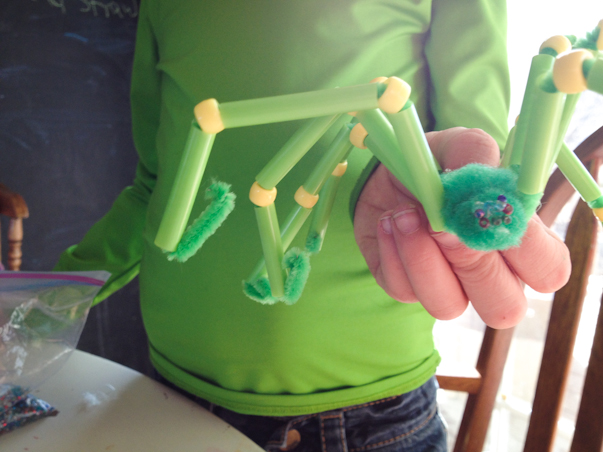 “I don’t like spiiiiiiderrrrrrs!” was soon replaced by, “Oh!  It’s so cute!”

The best part of this project was the way the project took on a life of it’s own.  Before I knew it, second and third spiders were being constructed in addition to webs and flies (“Because spiders get hungry, too, right mama?” 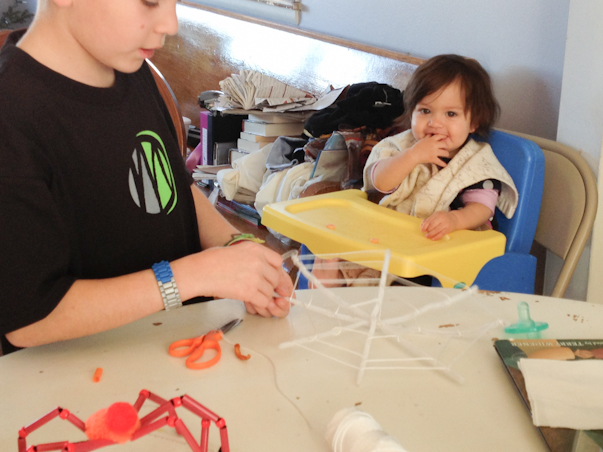 Teamwork, cooperation and good will toward men flourished. 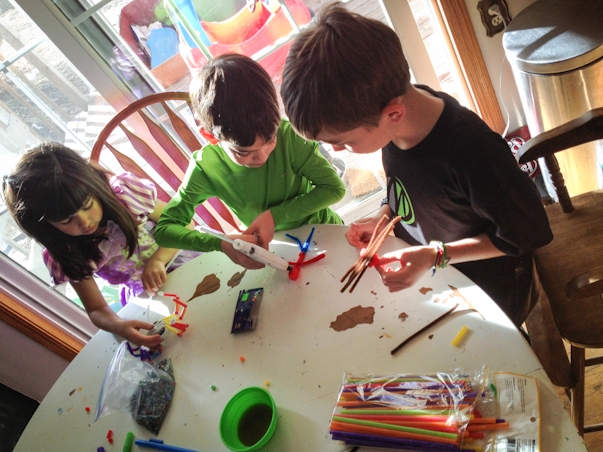 Spider-man even made an appearance and ended up restraining a few minifigures in the boughs of the tree. I feel safer when he’s around.

The spideys turned out beautifully (Tess made a rainbow one, of course, that is impressive) and now 7 of them beautify our tree, too.  They are welcome indeed.