Down By the Bay

I think we’ve had our fill.

I will, of course!, go into the gory details of each of the visits ’cause that’s what I do. So, visit numero uno:

We somehow suckered Cindy and Ivan into escorting us to the Bay. Okay, they willingly came along to check out the conference, brave the BART and help wrangle kids. Thanks be to God they did as I can’t imagine getting all 7 of us onto a cable car by ourselves. Anyway, the highlights of that trip were 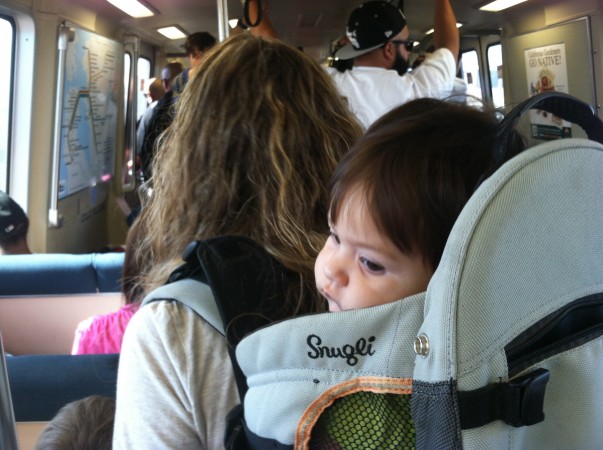 -Getting lost on the way to Oakland and having to get exit off onto Treasure Island ( sounds waaaaay more exciting than it is . . .) to turn around then having to pay the Bay Bridge toll a second time.

-Finding a bag piper in Union Square and eating at the Cheesecake factory atop the Macy’s. While waiting for our lunch, we hung out with the pigeons, checking out the city from between the giant Macy’s letters. 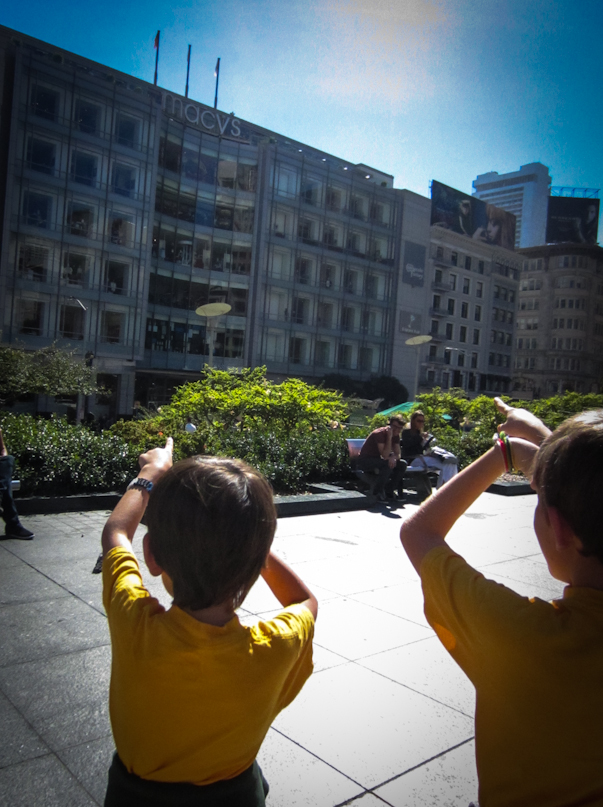 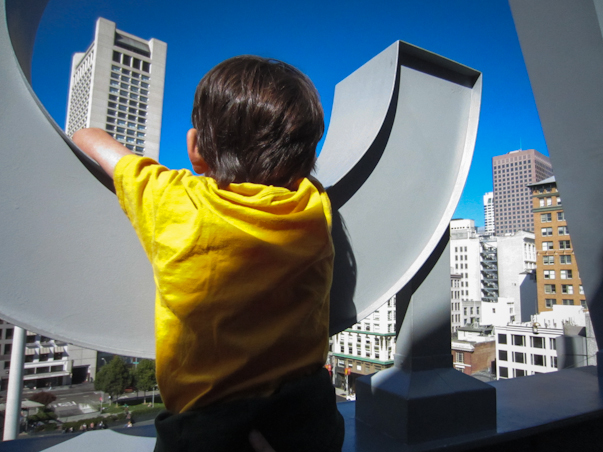 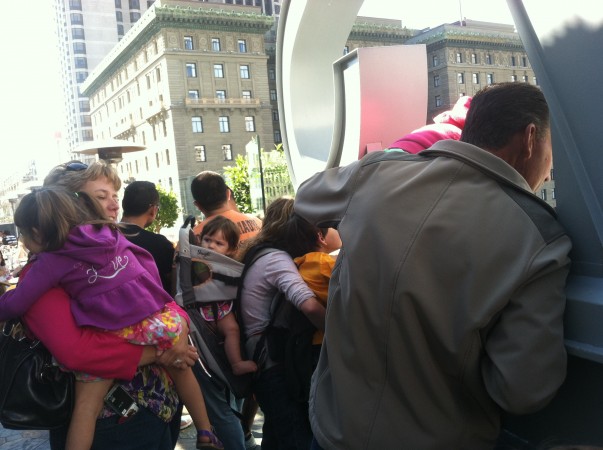 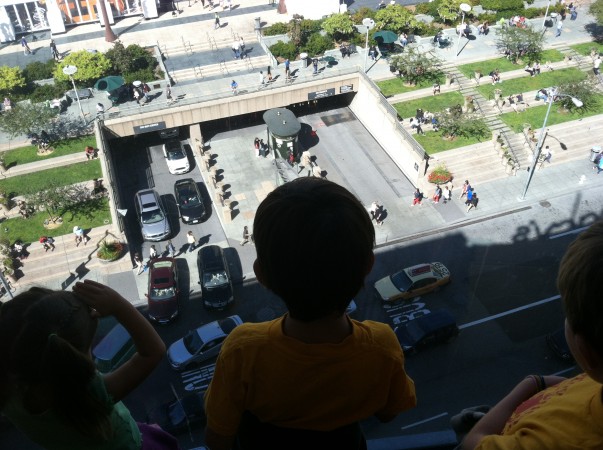 -Taking a cable car down to Fisherman’s Wharf and nearly losing Jac in a tragic cable car vs. city bus accident-thank goodness for guardian angels and stubborn cable car drivers! Upon reaching the wharf, we were stiff with cold (and being cramped on a crowded trolley!) and more than happy to hike up to Ghiradelli Chocolate for hot cocoa. 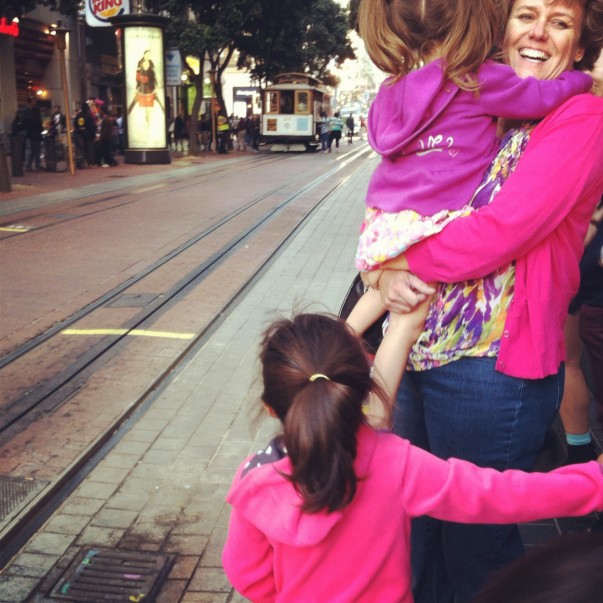 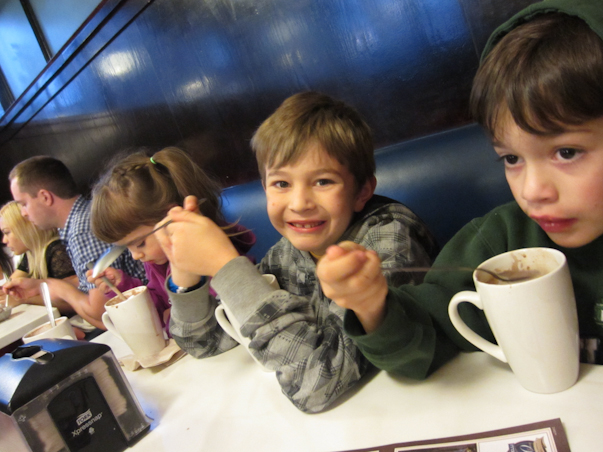 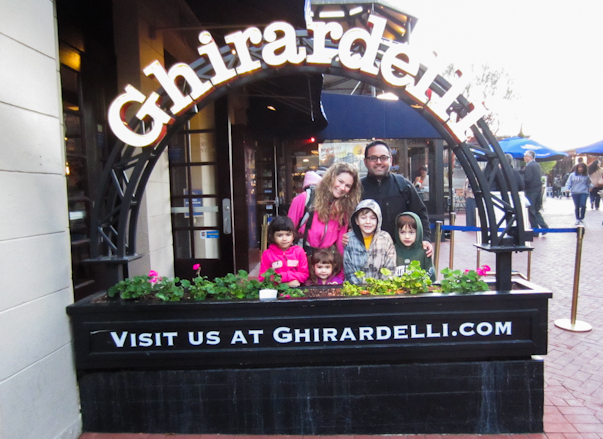 -Walking in the dark back to the cable car turn around and having a rat run across our path. A rat!! And then AGAIN!! *shudder* Hurray for city living! 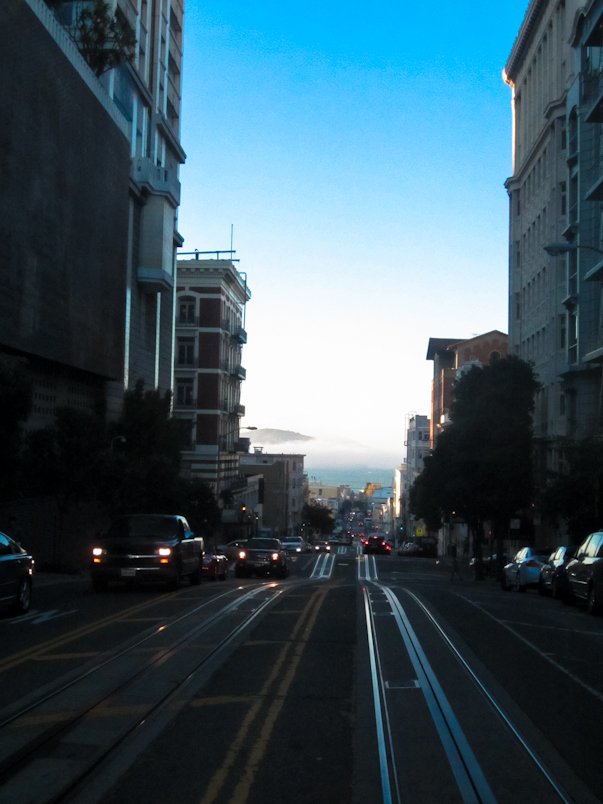 -Riding back to the BART was more comfortable and cozy inside the trolley with lots of Europeans with foreign words. There was rushing to look inside the mall with the twisting escalators then hurrying down to catch our train and missing the open potty’s. Dang.
-Squishing into the BART train with victorious/loud/tired Giants fans and Gemma making friends and then holding hands with the man who sat next to me. She was comfortable in his presence, evidently, as she fell asleep HARD and he had the extricate his finger from her grip when it was our stop. It wasn’t awkward at all!

However, the most memorable part of our trip that day didn’t even happen in San Fran. We exited the BART, climbed up onto the streets of Oakland, had a brief back and forth about which way we had come/should go and walked to the elevator to take us to our cars. Oddly, the elevator refused to work. We cut across through an outdoor seating area and found our way down to the parking garage entrance that was locked. Like bars-over-every-possible-entrance kind of locked. There we were, at 10:30 in the dark, dark night, without access to our vehicles. And, it turns out, we were more than 4 hours past open hours. Shoulda read some signs. . . The kids wrung their hands, and paced and wondered aloud at our predicament and courses of action while we four adults stared at each other and at the sign and the locked cars and back at each other completely stupefied. We called the number on the box and received no answer. Philip realized his blankie was in the van and considered working himself into a fine frenzy. Just moments before he hit panic, a car drove into a private part of the garage and Jac and Ivan ran (maybe with their wive’s encouragement) after the poor man who pointed out yet another call box. Success! A very kind yet slow moving night guard came to our rescue, we paid the exorbitant parking fee and got the heck out of there. 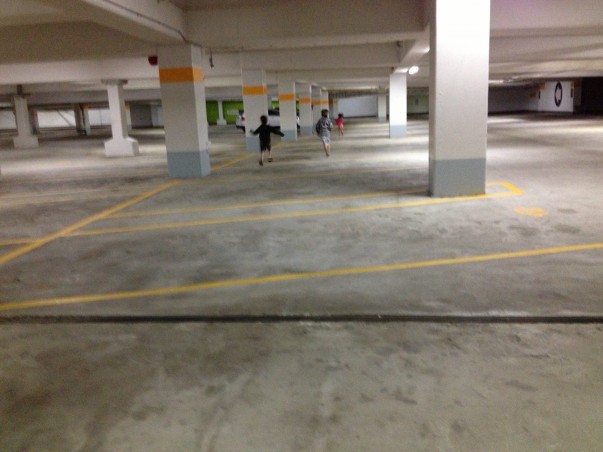 Lessons learned: Always dress for the cold. City rats are big and scary. Read all the lines on all posted signs as they are there for a reason.

And now we know. 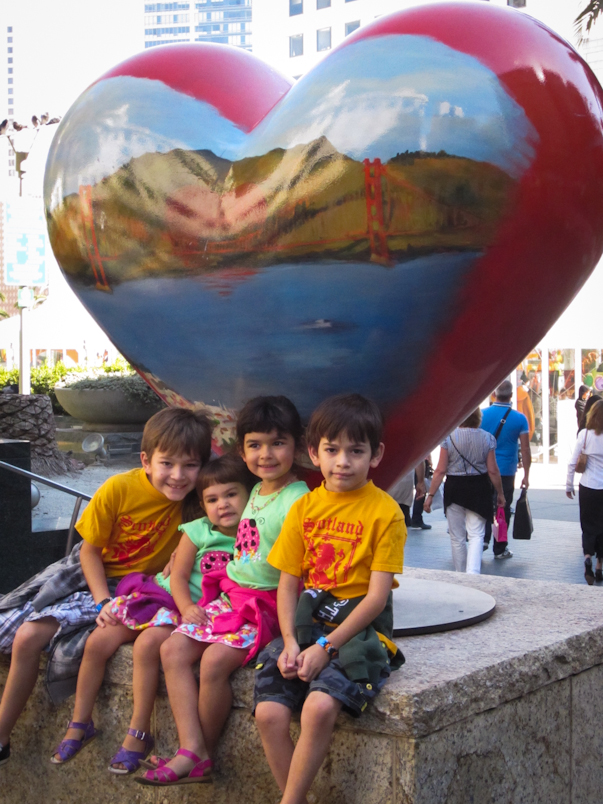