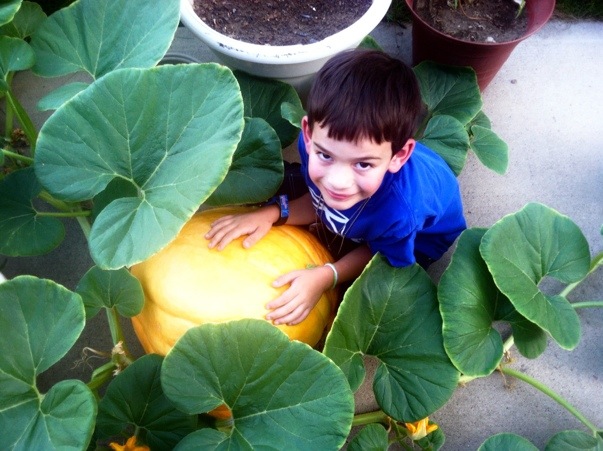 Phil likes big pumpkins. This one is at Grandma and Grandpa’s. Impressive, no?

When Allie came in March, we broadened her horizons by showing her a video by Sir Mixalot. I couldn’t believe she had never heard “I like big butts” before and then I remembered she was born in 1998. Ninety-eight, people.

If you’ve never heard it, you should google it.

No you shouldn’t. Never mind. Forget I mentioned it.

‘But’ has become Philip’s favorite word. I know it’s not the same as ‘butt’ and it’s a homophone, ( if you don’t know what that is you should google that) however, as Philip’s new word du jour has driven me stark, raving mad, Sir Mixalot’s song is in my head. A LOT.

I really can’t believe that I had a good long conversation with Elisabeth about how Philip has just blossomed with virtue since his first communion. “He’s like a different kid!” I boasted. Then I was smote for my pride.

Nearly every response to me this week has been prefaced with a “But!” and they’re not little “but”‘s either. Oh, no,no, nooooooooooooo. They are big, whiney, “Buuuut!!!!”‘s hence the ditty by the kindly Sir. Thankfully, the first four days of this week were Duc in Altum vacation Bible school for the oldest three. Between 9 and 2:30, I was blissfully but-free, save for the other kind that needed only occasional diapering. Then I’d go and pick up The Others and the protesting would begin.

I remind myself it is a stage. That as much as they loved every last second of Duc in Altum, they are low on sleep and out of sync and missing the Olympics, for-crying-out-loud. We haven’t even recovered from the lake and all of the California goodness. I should cut him some slack, but. . .

I’m just going to find that video on YouTube, have an adult beverage (like iced tea with ice and extra sugar. Ooooooh!) and try to avoid him for just five more minutes. The phenomenon seems to be catching.

(Muchas gracias to Bridget, Theresa, Randy and Kyle for the most epic DIA week ever. The kids want to know how it will go on without Bridget and Randy next year and express raw grief over it’s completion. I woke up to Philip signing Baby Shark –all the verses- at full volume this morning. Nice.)

Post-post Script – If you know which song I’m talking about and are now singing it or doing your best dance moves, please let me know. Help a sister out. Tell me I’m not that old. (Insert my mom rolling her eyes here. . .)