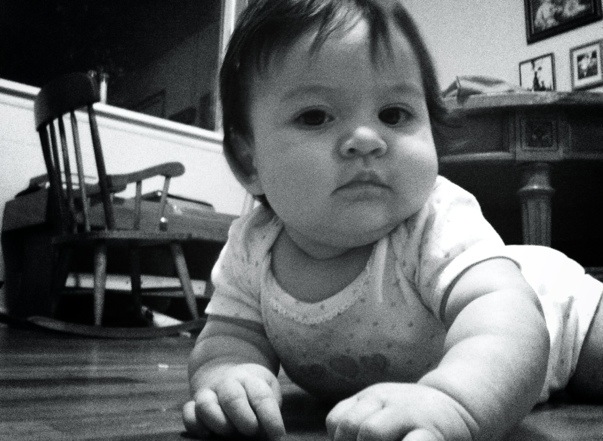 Susan has a theory: babies cry because they are frustrated about being stuck in their bodies. She holds our fussing babes and empathizes with them while we watch and giggle.

So it took us all a little aback when, a few weeks ago, he focused in on Gemma while she had a rare unhappy moment.

“I think,” he said quietly, “that she doesn’t like being a baby.”

****
Last night there was very little sleep in this house. I had just that morning thought how lucky we have been in the sleep department. I can’t be sure, but I think the Gemma girl usually only wakes at 3 and 6 am after eating around midnight- our bedtime. Then she threw us a curve ball. Last night she thrashed and kicked and writhed and strained to sit up. She hovered between sleep and wakefulness, growling and huffing through her exercises ALL. NIGHT. LONG.

We attempted her in the crib and laid listening, holding our breaths in anticipation of some tears. Instead she growled louder and louder until Jac took her downstairs to wrestle her there. When he brought her back upstairs to eat, she again began her frantic aerobics. Blearied eyed and fuzzy minded as we were, it was so very clear that Susan and Philip were right, Gemma is miserable in her flesh. In fact, she was not satisfied and smiling again until Max came in to wish her good morning. He pulled her to sitting and then let go, marveling at her ability to sit on her own. She beamed back at him, relieved to be upright and independent. I have thought all day about her impatience to grow and how Susan’s theory rings true for our little lady. My heart hurts for her and quavers at the thought of her being mobile so soon. But I will savor these struggles and moments while they last because if this is the sum of our problems, I’ll take it.

That and a few more hours sleep.