It Comes Out In The Wash 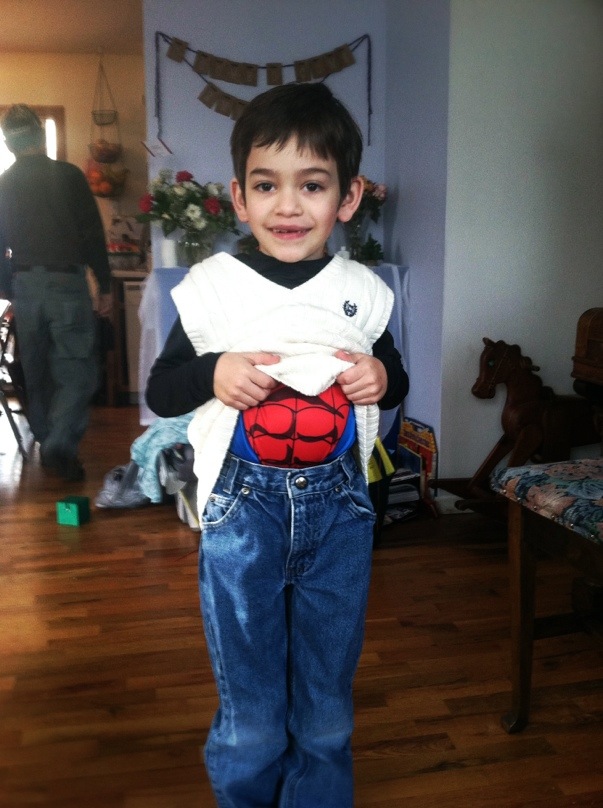 The thrills! The spills! The pains! The STAINS!! It’s yet another round of

Just days before Gemma’s arrival, what was discovered to have been washed and DRIED with every pair of jeans in the house?

a. A full sized Hershey bar
b. An ink pen
c. Two crayons

If you guessed a pair of wax sticks, you’re right! And not only that but the crayons were light and hot pink. If Chelsey had not been newly arrived, I would have cried. Instead I stormed over the injustice of it all and defended myself by saying I didn’t have time to check every pocket every time. “Obviously you do. . .” was Jac’s response. He’s lucky he’s still alive.

Question two: I spent an hour and a half scrubbing and pretreating the jeans so that not all was lost. Which magic Internet cure did I use?

I wanted to use WD-40, but Jac insisted on the Goo Gone. It had, after all, removed the crayon he used on the chalk wall. As much as I despise the smell of the stuff, with a toothbrush and some elbow grease, it left nary a trace of the crayons behind. Never mind that after two wash cycles and two extra rinse and pre soak cycles we still reeked of the stuff. . .

After Gemma was born, everyone pitched in with house work help. The boys, while in charge of laundry, washed and dried which item with a full load of reds?

a. A pull up
b. A full newborn diaper
c. A dog bone

Somehow they managed to launder and then dry a pull up. It was most likely empty, but still. When I discovered it, I wondered how on earth it made it past them into the dryer because, when soaking, those things are HEAVY! And the pilling that was all over everything. . . Ugh. Again, I contemplated tears but was just too tired to put in the effort.

While the boys (biggest ‘boy’ included among them) were handling the wash, how many baskets of DIRTY clothes did they bring up for me and I then folded?

Twice – yep, TWICE – I folded the majority of a basket of clothes before I would frown and question if things were indeed clean as they claimed. The first time a shirt of Ellie’s gave it away but the second time it was a pair of chonies. *shudder!*

While Mama Syd was here, what heroic feat did she accomplish?

a. All the hand-me-downs were washed and put away in the right tubs. ALL of them.
b. Every item in every drawer was fitted on the child before being put away.
c. All the laundry was DONE.

Every piece of laundry was washed!!! Sure, it was only for a few hours and then the kids changed into their jammies, but I am in reverential awe over the accomplishment. She deserves a trophy. Needless to say, she was a bit tuckered out at the end of the marathon, physically AND mentally. “One day of laundry for you guys is the same as an entire week for a single person!” Well, when you put it like that. It should be noted that the hand-me-downs are in fine shape because of her and she did have the boys try on all of their clothes without tears or incident so she should get a medal for that as well.

We have instituted what new practice around here?

Max has lobbied (and in truth, practices) for Repeat Wednesday (and Thursday. He’s loyal down to his undergarments, that kid), however it is a laundry schedule we are following. It’s still pretty fluid, but Mama Syd will be happy to hear we have done darks on Monday, whites on Tuesday, sheets on Wednesday and reds on Thursday. We’re staying caught up at the moment! Meanwhile, I’m trying hard not to picture what will happen when we are broadsided by the puking sickness. . .

Now for the bonus round!

If you had spit up on your jeans would you

a. Wash them
b. Wear them at least two more times

No, really, what’s your vote? It’s Jammie Thursday for me until the polls come in.