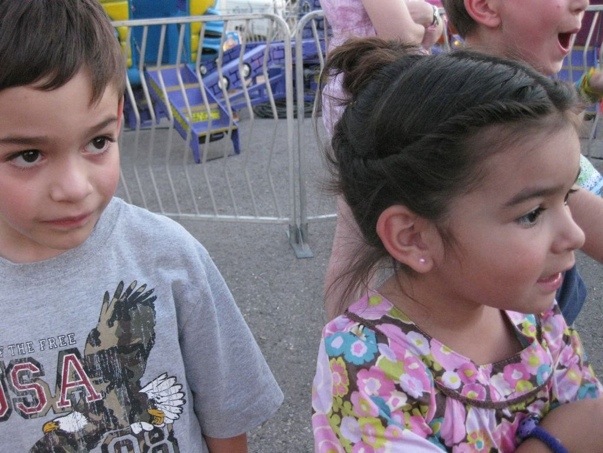 For the purpose of posterity, it is my solemn duty to here record what the middle are saying as of late. Our current slang, if you will. In considering this post, I thought perhaps I should write it down somewhere private for them to have later only to remember that I don’t scrapbook anymore and we are trying to cut back on clutter. This here blog is my children’s baby book.

I also consider THAT from time to time. Someone told me this summer that my kids will love this when they are older. I question if that will be true. Maybe they will be all, “Mom!!!! Really?!?! Why did you have to blog about EVERYTHING?!?! How am I supposed to get a job?? If you google me you can see me in a metal tub at the lake!!!” to which I will yell, “I birthed you without drugs!!!” and then we’ll be even.

Max has taken up some new voices. Some, like Little Alfred from the Hank the Cowdog series, make me bleed from the ears. The baby talk is SO ANNOYING. However, his Russian accent – picked up from his introduction to Rocky and Bullwinkle – is hilarious. I’m listening to another audio Ted Bell book (I can’t recommend it. It’s awful. Now you can judge me. . . ) in which the very talented reader has several Russian characters to portray and Max sounds just as good if not better than the professional. It makes me laugh every time. It’s also rubbing off on his siblings so sometimes it sounds like I’m in Red Square but really it’s just the living room.

Max has also taken to saying “Oopsy-tidliwinks!” in an affected voice when something goes wrong. It. Is. Ridiculous. And now everyone says it. Ugh. Boo.

Ellie likes voices, too, at the moment. My favorite? The ‘Robot.’ She does such a good imitation, though it remains a mystery where she heard it first. But she puts her chin down, becomes stiff and busts out the robo-talk. “Mom.” she monotones. “I am a robot. I need to go potty. Robot potty.” (If you are from the future and are reading this in regards to employing her or giving her a scholarship, you must know it is just darling. And she probably doesn’t remember so don’t ask her to do it for you because you will be disappointed. But it’s okay because you probably have a REAL robot since you are from the future and all. . . )

She is also really liking her name right now. A few weeks back someone called her Elizabeth and she had a fit so some effort was put into explaining that really IS her name. Now, when you call her anything BUT Ellie, she will hold up her hand and say, “No! I Lidabess Ellie.” This is really funny because we say a lot of “Sorry Charlie”‘s, “Good job, Bob”‘s and other such things around this joint. She does a lot of correcting us as a result. Yesterday she corrected me when I called her “Baby” and Sunday it was for calling her “El.” We’ve called her that nearly from day one! She knows what she likes, I guess.

Ellie is currently heard quite frequently yelling, “Hot Tamales!” Except when she says it, it sounds like “HOT TOMMY’S!!!!”

And lastly, overheard this week:

Max: (from their bedroom and very excitedly) Dad! Let Monday out! I see a squirrel by the playset!

Tess: Yeah! That way we can have MEAT for DINNER!

I don’t know what to say.