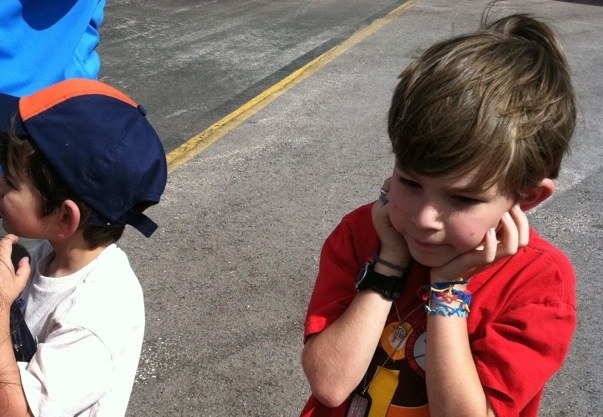 When I was pregnant with Max, Linda Hofer was full of dire prophesies. Everything from how tired I would be, how I would dress future kids, the feeling of crazy that seeps in when you are home alone – nothing was left unattended. I recall so clearly those wise words – all of them – as if they had been recorded by video. At the time she had 3 teenagers, a late elementary school aged boy and Marianne was just a second grader. She was “in the trenches,” as it were.

“You will think they are noisy when they cry, but I am telling you it is nothing, NOTHING like when the boys get older. Don’t laugh! You think it’s funny but it’s not. They will reach this stage where they are pounding and banging on everything and humming and tapping and can’t stay in their seat and when you think you’ going to kill them, they just look at you like, “What?” and just keep banging! Just wait! You’ll see!”

I DID laugh. A lot. I thought I knew what she was talking about because I recalled my own mother telling my brother and I to knock it off when she felt we were making too much noise. I never imagined it could be like THIS.

It really is just as Linda said it would be.

Max is there. He is always, ALWAYS tapping on something. This summer he’s learned to whistle. He has also amassed quite a collection of medals around his neck which, when not jangling from his constant movement, he is spinning or shaking or making a general racket with WHILE whistling and hopping. And could it be enough to make noise himself? Oh-ho-ho no, my friends! No, he’s attached tags to Monday’s collar so she jingles all the time and Max sure does his best to chase his sisters until they scream and shriek through the house like banshees. The piece de resistance, however, is this pink toy electric guitar that he has “bought” from Tess and he is playing non-stop. Granted, he has taught himself several songs including an entire hymn which he busted out Buffalo Chip style for the sems last night. Alas, he seems to think that the same note played over and over, ad nauseaum is pretty spectacular, too.

So we check this milestone off the list and I say thanks to Linda for the heads up. And I pray every day this stage is very, VERY short lived.

Or mark my words, Max will be.