I can follow a pattern.  Barely.  With much reading and rereading followed by seam ripping and some swearing.

I hate cutting patterns out.  HATE IT.  It is my least favorite part of sewing, hands down, and I will put it off for AGES if I can/have to.

And I’ve been known to design a thing or two.  But never too complicated.  Just hacking off the bottom of a shirt and turning the cut into a channel for elastic and viola! A skirt!  You know, that sort of thing.

So I was rather nervous about drafting up a pattern for not one boys vest for Easter but TWO with the help of this tutorial.  It looked so easy, I was sure I could mess it up.

Then came the ties.  Math and I don’t get along so well (I’m sticking my tongue out at multiplication and division at this very moment . . . ) and this tutorial required some in addition to angles and such.  There may have been some stress induced asthmatic activity around this point.

At last, it was time for the bow tie.  I only had a few hours before the Vigil when I cut out Jac’s tie and began to put it together.  Again, Martha, with the poor instructions and measurements!  What is that?

However, with minutes to spare, all my gentlemen were dressed to the nines, threads clipped and everything, ready to go. I wish I had a pic of them all together. . . They were a sight!

They DID look darn good, but I was most proud of my thriftyness with it all.  I would have told everyone I visited with that night about how clever I was, but I do have just a little more self-respect than pride.  Just a little.  The fact was, though, that I bought a second hand suit for 50% off and two 1/3 cuts of fabric for the ties for a grand total of $13.46.  I know, $11.00 for a suit is THAT great of a steal, but for two vests?  That comes to $5.50 a piece.  Not bad!  And three ties total were cut from the fabric. Genius, right?

Also genius is the way they posed for the “before” picture.  It was very funny until Philip put the entire suit on himself and in his fit of giggles and running around, slipped and cracked his head pretty good. Gooood times. 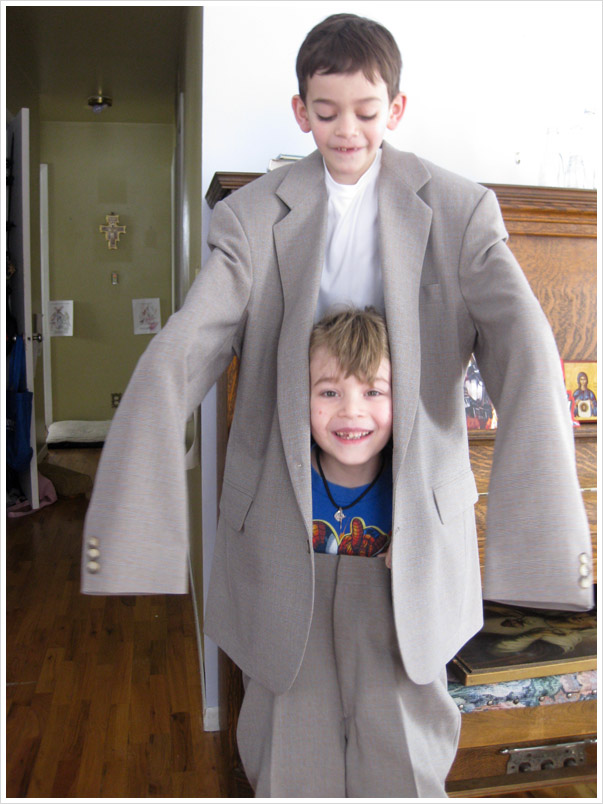