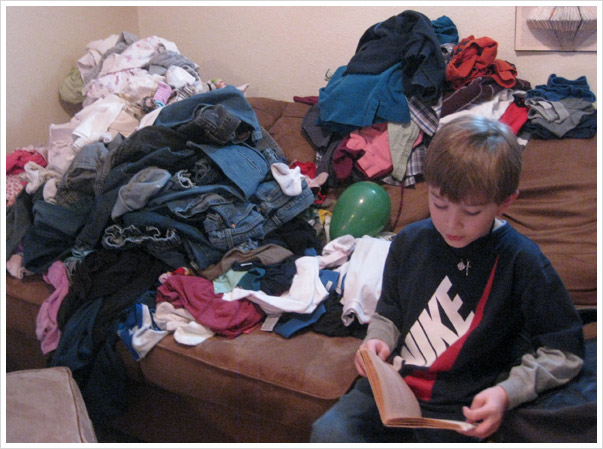 My new theory is this:

Max’s growth is directly correlated to the amount he reads.

Last Tuesday night we visited the library and checked out 7 Junie B. Jones books. Seven.  I didn’t want to get that many but he put out that bottom lip and Jac rolled his eyes and sighed that it was fine.  So 7 Junie B.s came home with us.

By Friday when I told Max to find a Junie B. for some rest time he huffed at me,

He remembered that he was only 7 and not 17 and broke out into a sheepish grin.  “Yeah!  I have!”

After some interrogation it became clear that he had read all 7 books in 2 1/2 days.

Now this is where my theory comes in – Friday morning as he lulled about waiting for prayer to start, he had his knees pulled up to his chest.  He was wearing a pair of jeans he received for Christmas and yet I could see 7 inches of bare shin skin.  (‘Shin skin.’ say that 10 times fast . . . )  Upon standing, the hem of the pants was no where near his ankles.  And then later?  He literally couldn’t get his shoes on.  The shoes that he had worn the day before with no ill affects.

Friday night shoes were procured and today he and I waded through his drawers and weeded out all pants that are too small – all of his Christmas gifts.

Now what? Contact the AMA and my possible link?  O-o-o-or. . . how about devising a contraption that he can wear on his head or from his ears that has pockets that hang down for him to put completed books in thereby stunting his growth.  It’s a thought, anyway. And if he keeps going, he’s just going to have to tough winter out in shorts, just so you know.