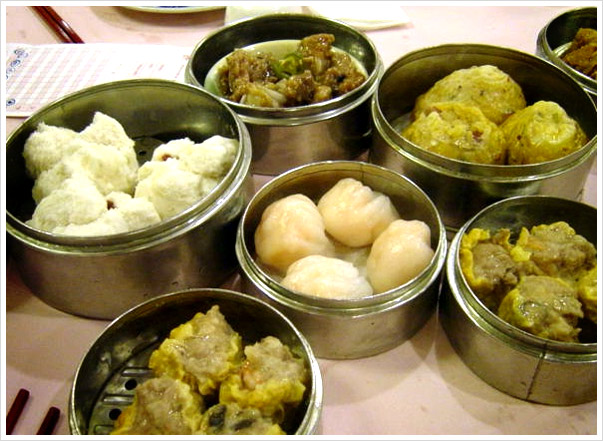 It all began last year – what I hope will become an annual event.
Us.
The Conways.
Dim Sum.
AWESOME.

This year we ordered 6 different dumplings but 2 of one order soooo technically it was seven.  I might’ve eaten more than 7; in the post dumpling haze, I can’t be sure.

We meant to take pictures of the deliciousness but were so excited about consuming them we forgot. You’ll have to make do with names and descriptions instead.

Beef rice noodles – too slimey for Jac but tasty to me.  Especially good with salty soy sauce
Prawn balls – minced prawns formed into balls and covered with crispy “hair.” Sounds less than appealing, but super tasty.  And they were so large, the server had to cut them in half with scissors.
Pork Dumplings – the largest, crispiest, tastiest dumplings EV-ER.  Could’ve eaten my weight in these.
BBQ pork buns – bright red, sweet, bbq-ed pork wrapped up in bright white dough and steamed.  So fluffy. So light.  So darn good.  Two orders of these were put in and two more could’ve been eaten.
Custard buns – Okay, I can’t speak with authority about these because I don’t do custard.  Well, not electric orange custard anyway.  But they look just like the the pork buns and there was enough oohing and aahing from Jac and Greg and Trish that I trust their opinion that they were good.
Beef and Shrimp dumplings – Not your traditional looking dumplings.  Unrecognizable, actually.  Beef and shrimp combined and then wrapped up in a noodle.  Like a dog treat standing on end.  But much, much tastier.

We ate until our stomachs hurt and laughed until our cheeks did, too.

Conway’s?  Can’t wait to do it again.  Mark your calendars for Dim Sum with the Daniels, ’11. 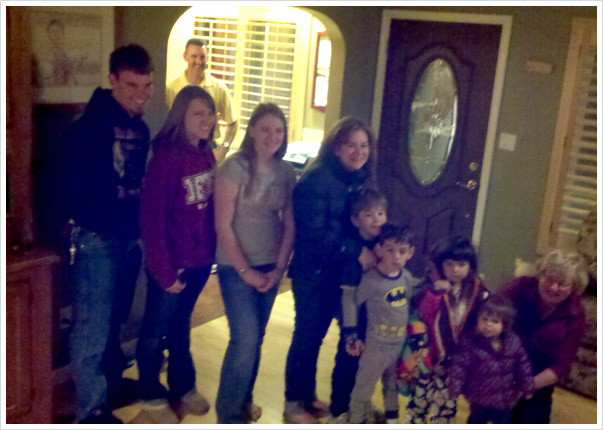 “Tradition!  Tradition!” I can hear Tevye singing every time I look at this pic.

For so long now I can’t remember it’s beginning, we’ve been doing this line-up.  Back when we began, I was the one in back, even behind Billy.

Well, you can see where I end up now.  And it won’t be too long before Max will take his place behind me, too.  Then Philip and Tess along with Ellie and anyone that comes after her.

To save Cindy’s sanity I won’t dare mention the next generation of HER family.  But it’s coming, too.  It makes me wonder how many will end up in the line up someday.  Because we WILL keep it.  After all, it’s tradition.

After our bowl-a-rama with the Wyeth’s last year, our Christmas gift from them was another trip to Manteca Bowl.
Suh-weet!

Papa Chris was sick, but the rest of us along with Ike and his girlfriend and her twin and Chelsey’s bff all showed up on the lanes.

There were enough of us that we took up 3 lanes.  And then played 3 games each.

That’s a lot of bowling.

Max probably did the most tossing of anyone, taking over when his brother decided half way through game one that he was done.  And Tess?  Big enough to toss a 7 pounder all by herself, thankyouverymuch!  (She didn’t do it but a few times though.  They rolled PAINFULLY slowly down the lane.)

The next day (okay, okay. Days. ) we were all very, very sore.  But we would endure it all again for the fun we had!