Have you taken down your tinsel?

If you answered yes, know that I am shaking my head in scornful judgement of you.  Shame.  SHAAAAAME!!!!!

Christmas is just beginning!  It is too big to be spent all in just 24 short hours! The KING of HEAVEN and EARTH came to us in the form of a baby, forcryingoutloud.  THAT deserves some partying.

How about 12 days worth?

That’s right.  TWELVE.  I know you know that one song and have wondered at the 12 days and the weirdness of the gifts.  Right.  Those twelve days begin with Christmas and continue on until Epiphany – the visit of the Magi.

I’m starting our Twelve Days of Christmas today, a day late.  But it’s never too late to celebrate the coming of Christ.  Right?  RIGHT?!?!?!

On the first day of Christmas. . .

Upon our arrival to Mama Syd and Papa Chris’ house Philip announced one of his front teeth was loose.  Seeing as 1. We just paid a quarter of our yearly earnings in dental bills and 2. he has very few teeth left in his precious little head, I sighed, gritted my own teeth and prayed he was fibbing.

Sure enough, down on the bottom, the same tooth Max has been wiggling about in his own head was loosey goosey.  And not unnaturally done either!

As the week progressed, both boys began to complain loudly about their wiggly teeth.  They were uncomfortable and unpleasant.  We offered, numerous times to pull or push the offending tooth out.  Both boys were adamant in their refusal.  But the non-stop whining!

Finally Mama Syd offered a bounty on the teeth: $1.00 (big spender!) for the first tooth out.

Neither the boys or the teeth budged.

Tess, wanting to get in on the action, said she needed to ride on Philip’s bike back at home so that maybe she could knock her tooth out first and get the dollar.

Jac said perhaps the bribe should be whoever KEEPS the tooth the longest . . .

On several days Philip was reduced to tears out of fear.  He said he needed to be taken to the dentist in Rapid City.  He wept over blood and pain.  And then it dawned on us that he had no sense of a non-traumatic tooth removal.  Poor guy.  We tried to assuage his fears, but we could tell he wasn’t convinced.

Come Christmas, Philip’s tooth dangled from his gum.  We all oohed and aahed and sat on our hands to keep from taking care of it.  Nana Joyce threatened all with bodily harm if we forced the tooth out and we obeyed.

Then this morning we were awakened by a joyful voice.

Bleary eyed, we peered up at a gaping smile on Philip’s face.

“It must have came out in my sleep!  I don’t even remember!  It was just on my bed!”

He held out the tiny tooth.

“It’s so small.” he said, baffled how something so miniature had been harassing him so much. “And I get the dollar because I’m the winner!” 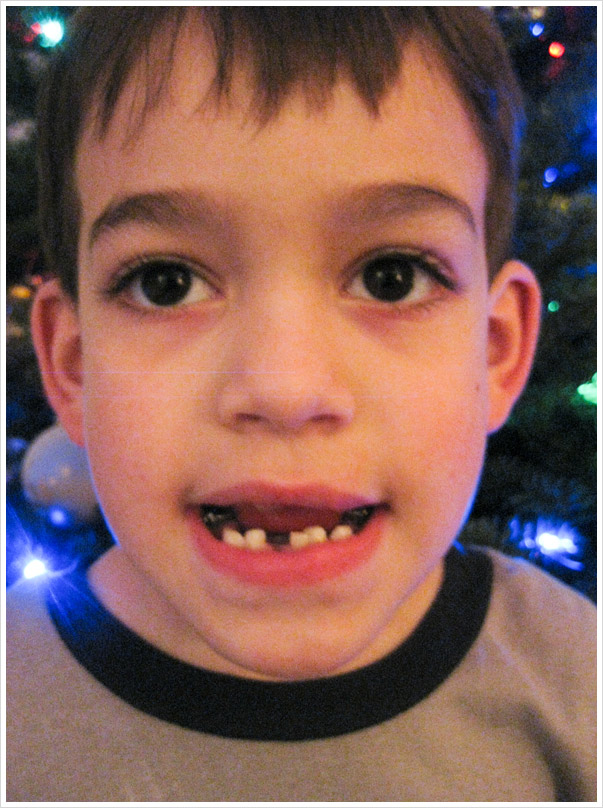