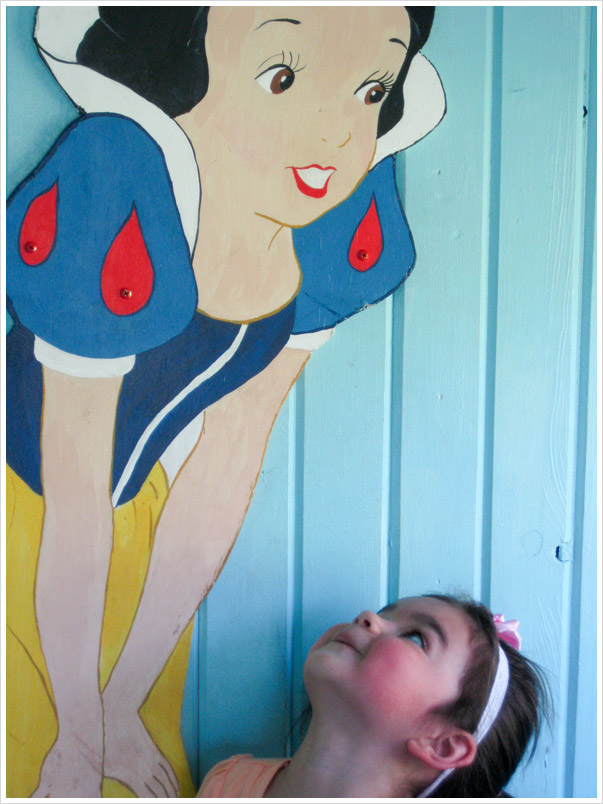 Tess became enamored with Snow White this summer.  My theory is that she likes this story so well because she looks similar to the heroine. Over and over again, she has been caught pouring over the pages of a little  dollar store picture book.  When she could, she would beg someone to read it to her and often she was claiming that she was Snow White. Now, let’s be clear – she has never seen the Disney version.  I think she’d be pretty creeped out.

Meanwhile, I’m totally creeped out by the very story of Snow White.  No, really.  There’s all sorts of messed up in that tale.  The beginning – the mom pricks her finger enough to bleed all over the snow  OUTSIDE her window and does she go in search of a bandaid or elevate the wound?  Nooooo, she finds the gore so beautiful that she wished for a child with such beautiful coloring.  What the-? Then, when she shows up at the dwarves place, they warn her not to answer the door.  The bright gal that she is, she ends up nearly dead twice before the apple finally does her in.  She falls for the evil step-mother ev-er-y time, reasoning that the old peasant woman couldn’t be so bad even after she’s been tricked before. Grrr!  And finally, the creepy-creep-creepiest is after she “dies” and the dwarves can’t bear to bury her so they make a glass coffin and keep watch.  When the prince shows up, he falls in love? With a dead girl?  Can anyone say necrophilia?  Ewwwww.  He insists that he can’t live without her and begs the dwarves to let him take Snow White home with them.  After a little resistance, they allow him to take her. When the princes’  pals lift her up, they dislodge the apple, thus reviving her.  She wakes up from a stinkin’ coma/death, sees some stranger who professes his love for her and she loves him immediately and agrees to marry him ON THE SPOT.

Blah, blah, blah, and they lived happily ever after.

That will last.  And Lord willing- here’s hoping!– this stage will not.