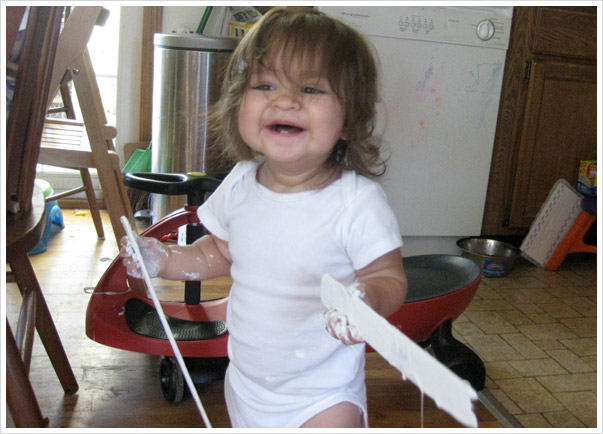 Don’t laugh!  It’s true.  She is brutal and rough and in -your-face about it.

First, she has a temper.  Yes, the older three have their moments – Philip can throw a hissy fit like no-one’s business and Tess can scream for days – but their composure melting out of nowhere?  Unheard of.  There is always a cause that provokes.  Not so much for Ellie.  She suspects an injustice to herself and LOSES it.  “My siblings are touching my stroller?  Oh, HECK no!”  When she gets this way, she inflicts injury on herself ON PURPOSE. None of the others did this.  Ellie, however, will erupt into screams and, if that doesn’t get the reaction she is after, if she is standing up, she will squat down and bang her head on the floor just to make her point.

Second, the others learned early and well that “Uh-oh!” meant trouble for them and that they should stop whatever it was they were doing.  This only works when Ellie is walking towards something she shouldn’t.  The rest of the time, she hears it and then begins to destroy in earnest.  Just this morning I found her opening the drawer filled with kitchen towels and announced, “Uh-oh, El-Belle!” She didn’t even look at me, but moved to a more direct position over the drawer and began pulling things feverishly out and onto the floor.

When I removed her, she howled as if she were being beaten and, when I proceeded to ignore her, she stood upon my feet and thrashed at my legs DEMANDING I recognize her.

Third, she is a climber – has been for months – whereas Max NEVER learned to climb from his crib, Philip waited until later and Tess would climb in. She is ever so rough, pulling hair, skin, earrings and will persist with more force after you tell her to stop.

Unlike any of the other kiddos, I have to restrain her bodily when I go forward for communion.  She lunges forward towards the host and a few weeks back as we approached Fr. Gary, she threw her paci onto the sanctuary steps, yelled “Amen! MORE!” and pointed to her mouth.  The following week, she poked and clawed at my mouth all the way back to our seats until she got me to open up and, upon finding my mouth empty, yelled and berated me for my ungenerosity.

Ellie will eat anything – unlike her siblings – and has decided she likes condiments.  ANY condiments.  If something goes on our plate, it belongs on hers, too.

But for all these differences, for all the ways she stands out from her siblings, in one strange way she is just like them.

How does that happen?  How is it that Max, Tess and Ellie have all developed a “thing” for their belly buttons?  It is their blankie and therefore, necessary for sleep.  In fact, the other night I zipped up her footie jams and put her down.  Some time later when I put the older ones to bed I found her screaming her head off, face wet, hair damp.  She was MAD.  It took me a moment to realize my mistake and as soon as I unzipped her and she found her skin, all was well again.

I can only shake my head at it all.  At her coarse, demanding ways.  At her in-your-face intensity.  And most especially at her belly.

Meanwhile, we wait to see if any, or all, of these traits will disappear.  We can only hope.