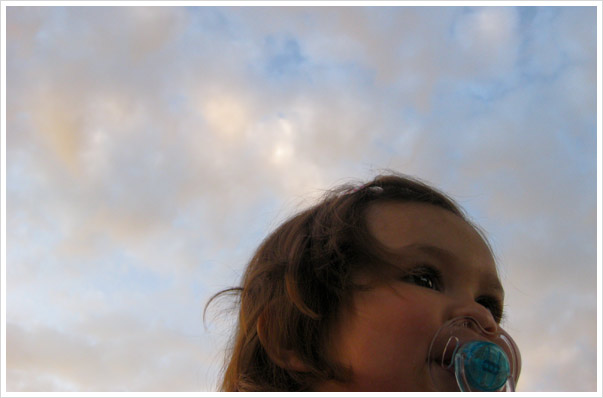 After our  trying week, I sat down on Friday to accomplish some sewing.  What should have been – and really was – a simple project turned into a disaster.  The machine seemed to be acting cantankerously so I cajoled, begged and pleaded with it to cooperate.  It soon degenerated into swearing (it was nap time) and frustrated growls.  I took it apart, cleaned it and added oil tenderly.  No dice.  The machine was dead.

After the week we had had, this was too much and I cracked.  Cracked, I tell you!  I cried and cried and then cried some more.  You know, the choking, hiccuping sobs that so annoys me in the kids. I crashed around the kitchen and stormed about the living room until Jac came up so I could rail at him.

It was, how do you say?, unpleasant.

By Saturday, my eyes were puffy but  I was calm.  Under this new feeling still brewed a simmering resentment.  “Why? Why Lord? Why now?  What is this about?” And probably the loudest and most demanding, “Why ME?!?!”

I chose not to voice any of my crankiness, but didn’t get rid of it either.  Imagine my chagrin during the second reading at Mass on Sunday:

Brothers and sisters,
You have forgotten the exhortation addressed to you as children:
“My son, do not disdain the discipline of the Lord
or lose heart when reproved by him;
for whom the Lord loves, he disciplines;
he scourges every son he acknowledges.”
Endure your trials as “discipline”;
God treats you as sons.
For what “son” is there whom his father does not discipline?
At the time,
all discipline seems a cause not for joy but for pain,
yet later it brings the peaceful fruit of righteousness
to those who are trained by it.

So strengthen your drooping hands and your weak knees.
Make straight paths for your feet,
that what is lame may not be disjointed but healed.

Even with kids fidgeting and poking and whispering, the words of scripture reverberated in my heart.  The Father was smiling with raised eyebrows and I got it.  I really got it.

The Deacon preached about the beauty of discipline with words I had just spoke to a friend.

“How will a child learn to love and trust without discipline?” he asked.

I finally heard Him.  He is sending these trials to discipline us.  To discipline ME.  Will I trust Him?  Will I allow Him to teach me love in this time or will I disdain what He sends?

I chose to be healed and raise my “drooping hands.” I will take this lesson and learn it, being trained in the way the good Lord sees fit.  And I will wait – with patience! – for the peaceful fruit He has promised will come.

In related news, Ellie spent the entire Mass trying out the rigidity of her limbs and proclaiming to all who would listen, “NONONONONONONOOOO!!!!!!” (It’s her favorite phrase at the moment.) Oh, it was good! Discipline? You betcha!  Bring it on, sister!