– While in the process of set-up at the lake, Mama Syd told Philip to get out of the sun.  This is how he obliged: 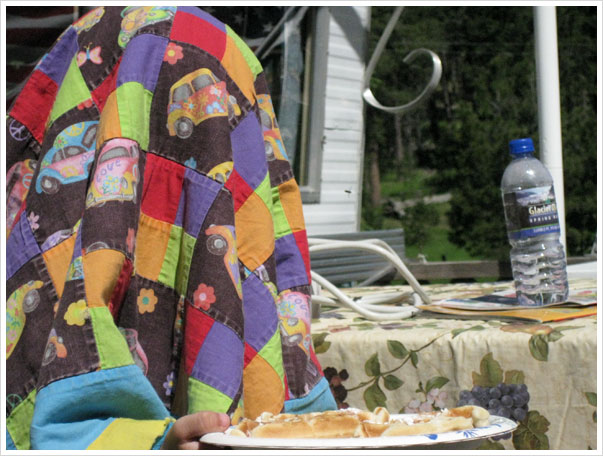 -While driving around town, Philip casually remarked, “If you slid down a dinosaurs back, you’d have to be really, really careful. Right, Mom?”

-While waiting for some action at the bathroom at Sanford’s, he was making insightful and obvious observations about all of the photos and memorabilia.  Then, after a brief pause and toatlly unrelated to anything seen or unseen, he looked deep into my eyes and declared in a very serious tone, “And if all the football players ended up in a pile and their feet caught on fire, that would be bad, huh?”

– Not long after the football conversation, we were discussing birthing babies. It seems he has decided, in all of his vast knowledge, that “Having the doctors cut open your body and get the baby out” is much easier and more preferred to the alternative.  I tried not to laugh while I listed the pros and cons of each option.  “Mm-hmm,” he said, absently agreeing with me while he was thinking it through. “But it would really, really hurt if you had to push the baby out of your ear.  AND -” he paused dramatically, “it would be dirty with wax.  But what about your nose?” I was still recovering from the ear suggestion when he answered his own question.  “Nope.  That’d really hurt, too.” End of discussion.