Montage Monday On the Run

When I came away to Black Hills State, I had a few goals in mind that had to do with becoming someone new.  And if not entirely “new,” surely “improved.”  Among these ideas was the thought that I wanted to become a runner.  Never mind that I hadn’t run more than 100 yards since middle school (doctors orders and I’m a rule follower . . . ), I was going to do it.

I thought God was giving his blessing on this goal when I met Chrisa.  My first friend at school, she was a long distance runner.  The luck!  She encouraged me to tie up my shoes and go on an “easy run.” with her.  How hard could it be?

I thought I was going to die within 3 blocks.

Around a half mile, I gave up the ghost and walked the rest of the way. Chrisa, the true blue friend that she was (and is) gave up her run and walked with me.

I gave up the idea of becoming a runner.

That was 12 years ago and Chrisa and I are still friends.  I still don’t run (except after escaping kids and the occasional loose dog) and Chrisa still does.  In fact, yesterday she ran her very first 1/2 marathon on the Michelson trail.

13 miles and then some.  At a mile elevation.  2,00o participants. I really didn’t want to miss it. After all, she had walked with me on that one and only run – it was the least I could do.

We woke up EARLY to make the drive up to Lead.  It was cool and cloudy without a breath of wind and perfect for a race.

It turns out we saw lots of folks we knew on the trail. Even the ones we didn’t know were eager for a high five from the kiddos and appreciative of their cheering.

We cheered the loudest for Chrisa.

She and her running mate had to have finished in under 2 hours.  I’m not sure because we got stuck in traffic and missed the official end.  i do know she made it, though, and I couldn’t have been prouder.

From Deadwood, we raced back to Rapid to take part int he Corpus Cristi feast day procession.  It was beautiful to slow down and honor our Lord like that.

This year Max walked with Susan and Tess got to throw rose petals.

I couldn’t have been prouder then either.

“Therefore, since we are surrounded by such a great cloud of witnesses, let us throw off everything that hinders and the sin that so easily entangles, and let us run with perseverance the race marked out for us.” – Hebrews 12:1-3 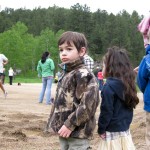 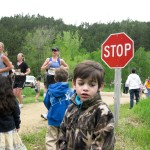 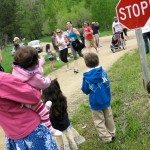 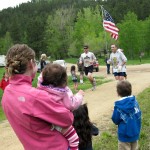 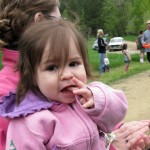 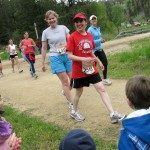 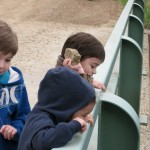 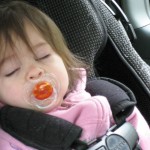 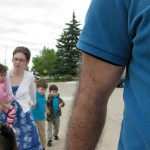 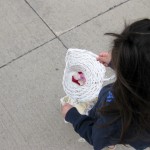 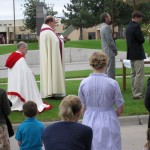 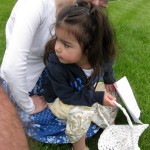