Montage Monday Rest and Other Things

This weekend we did nothing.  We laid around, took some naps and had nowhere to go.  It felt sooo good.

In between that loafing about, we managed to get some other stuff fit in, too.

– Managed to take in the Banff.  Woohoo!  To think that this time last year I was in a panic about having a baby at any moment . . . !  Anyway, the films were great, particularly one about a family who took a cross-Canadian trip in a canoe with their 2 year old and their border collie.  It got us thinking about an epic journey for our own crew.  Any ideas? Preferable without bugs.  Or snakes, if at all possible.

– Jac and Max participated in the city wide clean-up with the scouts in the rain and cold up on Dinosaur Hill.  According to Max, there were “a million cigarettes!  Maybe more!”

– Max also attended his first sleep over.  His birthday gift from the Hanson family was a “Hanson Day.”  He was so very excited and it was so very quiet here without him.  What does it mean that when we saw him again, he looked different to me?

– We did our part and took care of some recycling.  Who says reducing and reusing can’t be fun?

– We were scandalized by prom.  Not once, but TWICE.  Couldn’t get enough!  STM held their grand march at Cathedral and Fr. Tyler hooked us up with a view from the choir loft.  Because that wasn’t enough scandal, we made our way to the Civic Center to look in on the Central/Steven’s hootenanny.  I do believe Father said it best when he described it as “bedlam.”  Philip was most unhappy with the chaos of it all, but Tess?  As the rest of us tried to scrub the images from our brains, she burst into tears.  “I just can’t wait to be a grown-up! I want to be down there!”  OY.

– We had fun with Duct Tape.  Even Monday!

– Had a trip to pottery to paint!  Susan’s birthday gift to Max was a gift card for the pottery place.  Good times.

– Tried to stay out of the rain, but if you can’t beat it, join it!  We made some rain drops to bring inside.  April showers and all that jazz.

– Capped things off with some fashion experimentation.  That’s Tess as a “fairy godmother with a scarf.  And veil.”  Maybe this will get her prom craving out of her system? 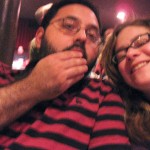 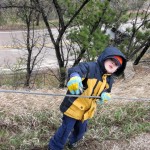 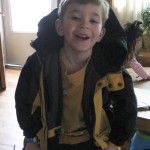 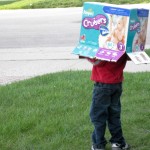 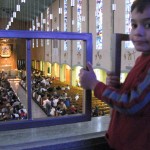 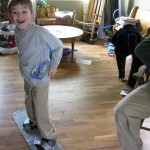 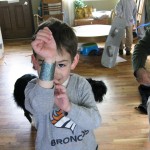 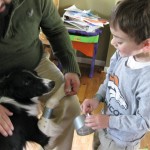 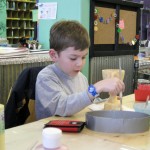 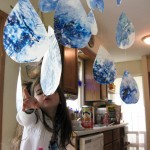 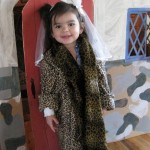