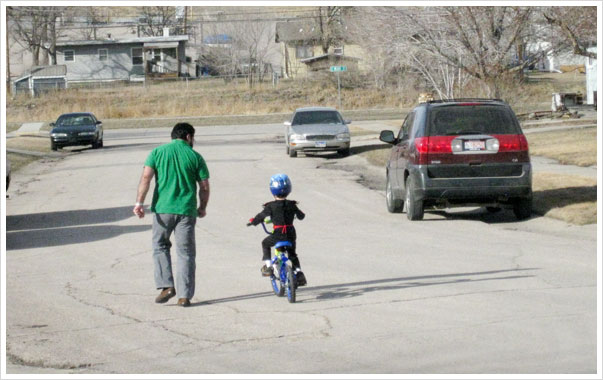 I think it’s cool that Max learned to ride his bike on his feast day and that Philip chose the feast of St. Patrick as his big day.  It helps a scatterbrained mom when it comes time to remember such things as this.

Perhaps that last bit made it sound as if we had this planned out.  We did no such thing.  While Mama Syd was cleaning out the garage (bless her!), she dug out Philip’s “big” bike.  We hung the helmet he was refusing to wear from the handle bars and reminded him that we were happy to let boys who wore their helmets ride bikes.  He looked blandly at me and announced that he wasn’t interested in riding his bike.

He walked away and then circled back.  He passed by, considering the bike again, weighing the choices.

After a failed attempt to get him to go on the bike, Mama Syd took over and with just 3 or 4 tries he was off.  Just like that!  No tears, no frustration, no ‘can’ts.’ While we whooped and hollered at his success, he calmly grinned and pedaled some more as if he had been waiting to show us this secret of his. 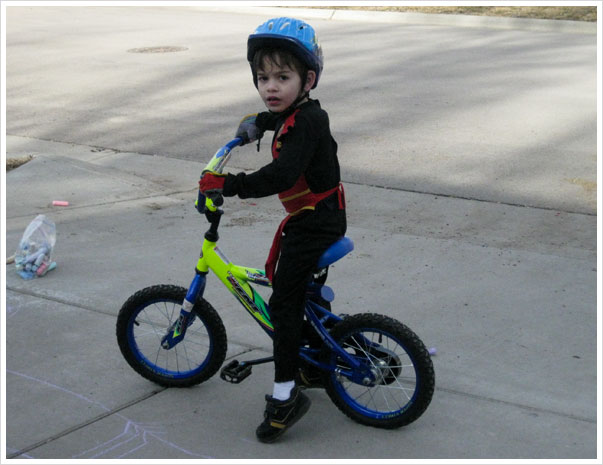 He’d tell you the suit made him do it.