When Jocelyn came to visit after she had her second baby, she settled in to nurse.  But first she pulled out a nifty contraption with which to be discreet.

“Do you have a Hooter Hider?” she asked.

“They are the best thing.  Seriously.  You need one.  You have to have one. I’m getting you one.”

And that’s what friends in Scottsdale are for.  To discover super-cool things that folks like us in the frozen north can’t even dream about.

True to her word, months before Ellie was born, Jocelyn had a lovely turquoise one delivered.

She was right – it was the best thing ever!  No more blanket clenched between my teeth as I attempted to be modest.  Jac cheered that I wouldn’t put a blanket over my head during Mass and bringing shame upon our family.

The “nursing cover” (I prefer “Hooter Hider”, really I do, but I wanted to keep “hooter” out of my little sponges vocabulary just a while longer.  I think they’re over-using “ta-tas” as it is . . . ) has been such a blessing.  It is easy to see (you know, for when I need to find it in this chaos), light weight and convenient.  It has been used more than any other baby item in the house besides diapers and the paci.  Really, it is a wonder.

And Monday night, it proved useful for more than keeping one’s chest covered.  The cousins had a birthday party complete with a “Pin the something-or-other on the Transformer” game.  Alas, no blindfold.  Should we use a sock? A towel?

What about the nursing cover?  It’s adjustable and easy on and off.  It was perfect.  I was sure my kids would balk at the ludicrous suggestion, but they found it hilarious that they were using it to cover their eyes.  All the kids played again and again.  And again.

I finally had to take it back and reclaim it for it’s original purpose as Ellie was getting persistent.

To Jocelyn: thanks a million for the best gift ever.  It saved the day! 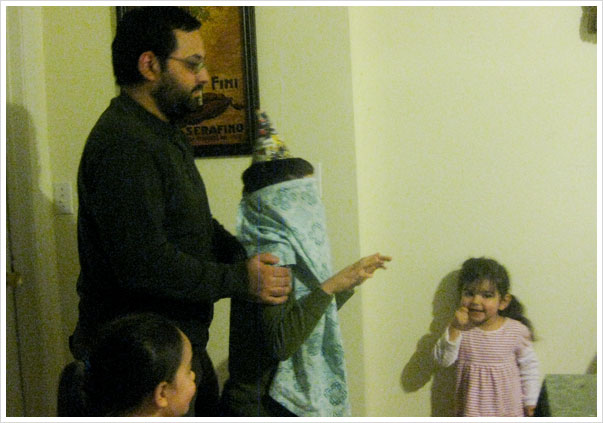