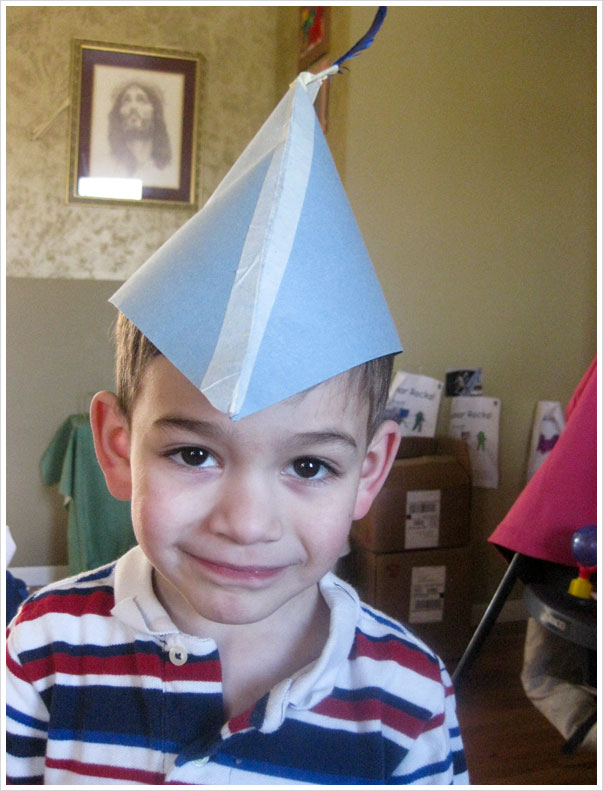 As the kids got ready for Mass, Tess began to whine about having to wear tights.  Philip, feeling far superior and finding a weak spot in his sisters tough exterior, began to laugh.

“Hey Max! Wouldn’t it be weird if boys had to wear tights?’

Then, I blew their minds.

“You know, back in the day, a long, long time ago?  Like when Robin Hood lived?  Boys wore tights and tunics which is like a short dress.”

Tess shot her brother’s a smug look, but their eyes were too wide and staring to notice.

Wait – what? I thought for sure the Robin Hood comment would close the issue and we would go on our way as merry as Robin’s men.

Oh, how I underestimate the resolve of my son.

You see, the boy has a thing for tight things.  I can’t begin to explain such a fixation except I think It has something to do with the fact that nothing fits his slender frame.  He chases after what he does not possess, if that makes sense.  He’s gone through bouts of it before, but lately he’s taken it to a whole new level.

For three days he only wore his ninja suit or his snowboarding jammies “because I like tight things!”

So the Robin Hood thing? Oil on a fire, it turns out. It has been non-stop asking for tights and a “man dress” for 5 straight days.  I don’t think it helped that we read a book about a Scottish man and I unwittingly mentioned that Papa Bill and Papa Chris had kilts.  “Will you make me a boy skirt like Papa after my nap?”

I was chaffing under the constant craziness.  How many times, I ask you, can you put off a boy who demands to know WHEN WHEN WHEN we will go to the store for boy tights?  “I don’t know if they have boy tights for you . . . ” and “They only make them for girls now, buddy. . .” did not deter him. Finally, I dragged him to the dress up drawer and dug through the bits and pieces.  Max had gone through his own Robin Hood phase and we had picked up a pair of olive green leggings a few years back to complete his ensemble (he’s nothing if not authentic).  I presented them with much flourish to Philip.

Yes, my little Robin Hood, they are.

Then, without further ado, he stripped down right then and there and put them on. He couldn’t have been happier until . . .

“Now will you make my man dress?”

*For the males who will read this and panic and offer to send him to spend his summer with Ted Nugent: Philip is four.  He refuses to dance during family dance parties.  He cried when we asked him to be in a family play.  He will be fine, testosterone-wise.  And, I should remind you, you DO own a kilt . . .