Sunday was the Feast of the Baptism of the Lord and the end of the Christmas season.  That made Monday the first day of Ordinary Time.

I have not been looking forward to this.

There is something about the anticipation of Advent and the preparation for Christmas.  I love how snug it all feels and how delicious it tastes.

I was reluctant to let it go.

Then, we woke on Monday to find this: 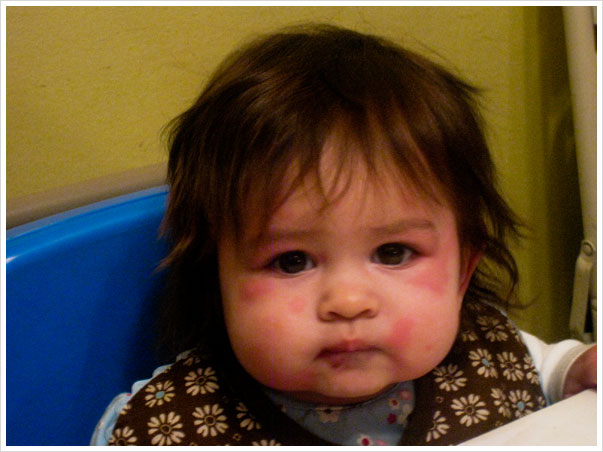 Hives.  In abundance.  All over her body and spreading.  Thankfully, she remained cheerful even as her eyes swelled and her skin radiated heat.  A trip to the doctor was taken and he pronounced her under the influence of a virus AFTER a strep culture and blood work was done.  She was such and trooper through it all.

Her siblings, though . . . they mutinied.  Tess had refused to sleep the night before (1 am before she cashed in!) but still woke up early and surly.  Philip was classic Philip – someone we haven’t seen in weeks.  We didn’t welcome back this missing person but did spend a great deal of time dragging him into “alone time” and listening to whining/yelling/crying. By the afternoon Max had caught the cranks along with the rest of them and it was a rather quick descent into misery.

It was quite clear things had indeed returned to ordinary.

However, as I cooked dinner, a thought flitted into my head.

It did!  The familiarity of making sustanance for my family was calming.  I knew what I was doing and where everything was and should go.  There was no rush so we could move on to other things, no hurry or pressure. My to do list (aside from the disaster of a house, mind you) was empty letting me focus on what was right in front of me.

Maybe ordinary time isn’t so bad after all.