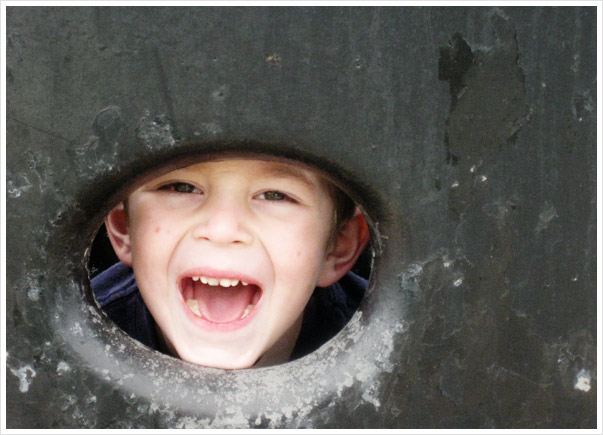 Parenting is a little like developing a Polaroid print.  You’re pretty sure you know what you’ve got, but only time will tell.  It is only after some shaking and patience that the real colors begin to emerge and you are able to view the final image.

Anyway, the kids . . . They come to you so tiny and precious and yet with their personalities and quirks already hard wired.  Through the tears and smiles and how they approach eating and sleeping, you think you have it figured out.  You make statements about them being “easy” or “fussy” in turn.  But then, then, they start to talk and you see more of who they are. They prove you right and then wrong all within twenty minutes and you wonder where it all came from.

At least that’s how I feel around here.

Max, as the eldest and first born, was a decidely tough baby. He ate well but took his time only to throw it all back up. He would sleep great as long as he was held and there were days when he did nothing but cry.  He was also smart, curious and totally uninterested in movement.  However, when he reached toddler-hood I thought I had it made in the shade.  He was talkative and personable, friendly and cheerful and oh-so-easy to get along with.  He still is but there was something lurking under the surface this whole time, waiting to come into the light.

Now it’s staring right back at me in the form of furrowed brow and nervous tears.

Anxiety – oh, how I loathe thee!

I have had a few glimpses of it from Max and I was beginning to be alarmed by the frequency.  However, when he woke up twice last week claiming he was sick (once I fell for it; the second time I was quicker), I drew the line.  As the story came out that he was too sick to go visist Grandpa in his costume, I no longer saw my daring boy, but a scared and nervous little Annie.

I was taken aback and stewed in frustration.  I don’t know how to calm this gnawing fear in myself, how the heck am I supposed to keep it from sprouting and growing in my children?  I wanted to rip out each and every anxious thought in Max’s mind, like pulling noxious weeds from a flower bed.  Fire!  Poison!  Whatever it took!

But he’s just a boy and I’m just a mother.  Up onto my lap he came and I soothed and rocked, trying to address each fear that I recognized so well.  I let him cry and I assured him I knew exactly how he felt.  Then I gave rallying speeches to hearten and cheer.

As it turned out, Grandpa was away from the office and Max was spared.

But later, while the kiddos were in costume, we stopped by Boyd’s to purchase candy for Trick or Treaters.  While Tess and Philip fought over who got to open the door, Max said firmly from his seat,

“You guys go on in.  I have something I want to talk about with Mom.  In here.”

“What do you have to talk about?” asked my never-nervous spouse. “Secrets don’t make friends.”

Bravely he walked through the aisles with his head up.  Though he was keenly aware he was in costume and all eyes were on him, he acted like nothing was out of the ordinary.  I wanted to cheer him on and applaud his resolve.  Instead I whispered,

“Good job, buddy.  I’m proud of you!” as we headed out to the car.  He smiled and walked a little lighter.

Later, as I anxiously recounted the days events to Jacques and implored him for help, he laughed.

“You gotta break the cycle, man!’

So I will.  It stops here.  My children will not be bound up and afraid to enjoy new things and places.  They won’t get hung up on others perceptions or opinions of them.  They will be free.  I will hold on until that develops, you can be sure.