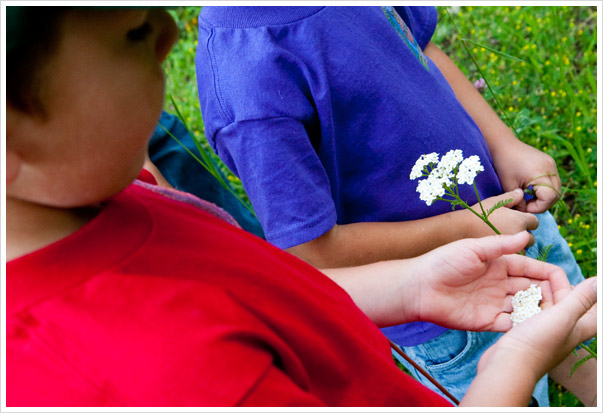 Tess is a girl.  She likes flowers.

I thought maybe my boys liked flowers, too.

To give to me.

On our Jungle Road hike, I thought they’d find it fun to hunt for different kinds of flowers and then try to find them in the wildflower book – a floral scavanger hunt of sorts.

Boy, was I wrong.  Not even the money I held out as a prize did much to stir them into interest.  The most I could get from them was a second glance at a blossom and some descriptions about what they looked like.

Their adjectives?  “That one? The one with the whiskers?”  “Oh, Mom!  It looks like ninja stars!”

Tess, on the other hand, would’ve picked handfuls of flowers if we let her.  And when asked to describe what she saw she used words like, “soft,” “pretty” and “pink.”

Also of interest on that walk was Tess’s sudden accumulation of long sticks which then became her “swords.”  I was the first born, so, even with a brother in the house, I called the imagination shots.  Never, ever, did I turn sticks into swords or guns the way my girl does.  Sceptors and wands?  Sure!  But weapons?

I don’t know why I continue to be surprised.