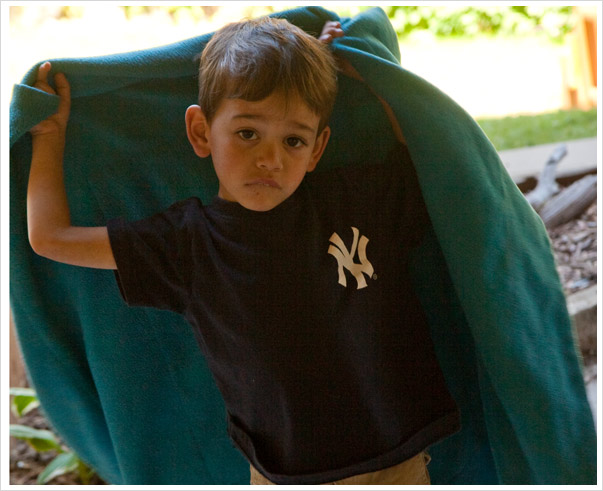 Philip has spent the summer dwelling on rockets.  He’s been fixated since the a trip past the Air and Space museum. He has begged to buy one and the NASA exhibit was almost more than he could bear; he could taste rocket fuel.  And, lo and behold!, people can RIDE rockets!  Get out of town!  While he wouldn’t admit it to the docent giving the tour, he’s been talking non-stop since Saturday about wanting to be an astronaut.

“SIGH! I just can’t wait to fly to space.”  His eyes would glaze over and he would begin a dream sequence.

As a result, our trip to the library last night included many books about NASA and rockets and space exploration to encourage his fascination.  A little infatuation never hurt anyone, I like to say.

So I was a little puzzled when, as I was retrieving laundry from his nap locale, he solemnly announced to me,

“Because I don’t want to have to go potty in the Shuttle.”

Aaaand that was that.  I wasn’t quite sure what to do or say to assuage any fears or phobias.  I laughed and assured him it was okay, no one would make him do anything and that I thought maybe he’d be able to get past it.  But he was pretty grim and unmoving.

This kid who can pee into a bottle in a moving vehicle.  This kid who never met a toilet he didn’t like.  This kid, who once he decided it was go time, potty trained himself faster than his brother or sister did.  This kid was balking at space travel because of bathroom issues?

I can’t really say I blame him.  It took me reading just a few sentences about how astronauts relieve themselves to be convinced I couldn’t do it.  Phrases included “rubber gloves,” “choose a funnel” and “tight seal.”  No. Thank. You.

However, I don’t relish the thought of my 4 year old burrying dreams.  Not just yet.  So, note to self, encourage him to take hurdles as they come and not to worry about them in advance, practice tricky potty situations (or, delegate Jac to that task) and do a better job of editing story content read outloud.  After all, some things are better left a mystery.