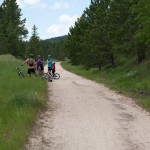 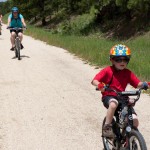 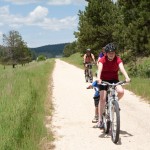 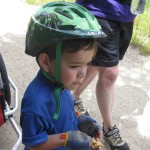 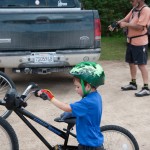 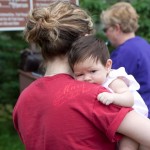 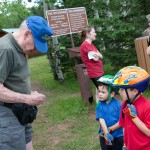 While “The Greats” were here, we made riding the “Nicholson Trail” (Do you see Jack Nicholson’s creepy smile when you hear that name?  I do.) a high priority item.  We endured several days of, “Can we ride the St. Nicholas trail today?”  “Is TODAY the day we’ll ride the Nicholson trail?”  etc., etc., etc.  When we finally announced we were riding the Michelson, the rejoicing . . . !  Awesome.

The ride was especially momentous for Max.  He had been trying to convince everyone that he could ride on his own bike for the entire ride.  The morning of the trek, he was up and at it early, practicing up and down the roads at the lake.  He so badly wanted to prove that he was big enough and good enough to really do it.  What a trooper he was!  Aside from a crash within the fist quarter mile, he had no problems and could hardly be convinced to rest throughout the entire 10 mile ride.  Not once did he complain or slow down and he kept reminding us, “See!  I told you I could do it!”. When we had reached our destination and were eating lunch, he allowed himself to relax and he suddenly looked very burnt out.  Upon questioning if all was well, he admitted,  “I didn’t think I could really do it, but I did!” For all of his bravado and outward confidence, he was unsure of his ability the entire time. The relief he felt at the completion totally overwhelmed him!

It was also a big deal for Max because the moment he learned to ride his bike last year, he began to ask when he could ride with Papa Bill.  My grandfather has been serious about bikes for over 70 years.  He is passionate and certainly the grand chieftan of our biking clan.  Max wanted nothing more than to be able to ride with him. But then, last August, Papa began to have heart problems and while he still rides a stationary bike, it’s been a long while since he was really riding.  We couldn’t bear to break the news to Max that he might not be able to ride.  Then, in the last mile, it happened. I stopped to tend to Ellie who was riding sag wagon with my grandparents and Papa Bill offered to ride my bike for me to the end of the trail.  I assented, and we left them behind.  Soon, Max caught up to Papa and as they rode down the trail he stayed next to Papa Bill.

“Just ride with you.”

It choked Papa Bill up.  But there, on the Big Mick, four generations rode the same ride, side by side.