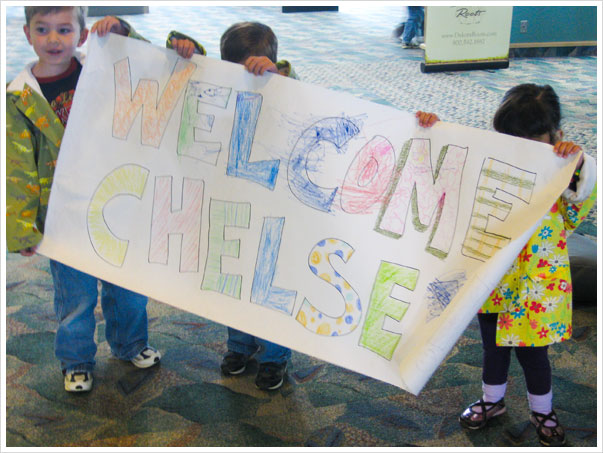 Nana Mickey – in keeping with tradition – sent gifts for the kiddos along with my birthday package.  This included a Star Wars compendium for Max.  Okay, it’s just a sticker book, but it has every possible character, ship, planet, weapon, etc. from the beloved movies.  It might as well be an encyclopedia the way he has poured and poured over it.

This new source of information has introduced new characters to him and has started his brain working in all sorts of directions.  As I made dinner last week, he studied the book.

“Mom?  What if your arms could split into 4 arms like General Grievous?  Would that be cool?”

I pondered the possibility as I juggled Ellie in one arm while attempting to stir-fry with the other.

“Or – this might be crazy – what if you had eight arms like an octopus?!  Wouldn’t that be crazy?”

I considered telling him that this would thereby turn me into Octomom, a title I don’t particularly relish.  I chose a simpler route.

“That WOULD be crazy!”

Max went on to quiz and question me about the blessed trilogy (that’s what I’m calling it now) while my mind stayed stuck on the image of me with more than two arms.  I fancied myself appearing like a Hindu deity (but without an elephant head).  I imagined the things I would be able to accomplish if I had multiple arms – I could nurse Ellie, comb Tess’s hair, tie Philip’s shoes and fold laundry all at the same time.  That wouldn’t just be cool, that would be AWESOME.  Productivity would soar!

I then remembered that this was a daydream and physically impossible and felt a little overwhelmed and dissapointed in the reality. Before I could get totally depressed though, I was reminded that Chelsey would soon be arriving which was quite possibly the next best thing.  Granted, her arms are not attached to my body, but I think it’s just as well.  How useful are all those limbs and fingers if you only have one set of eyes, one lap, one brain?

Chelsey  flew in on Saturday and we’ve been slowing getting her into the swing of things.  Already she is washing, wiping and wrangling things and children.  I tell you what, nothing is better than an extra set of hands.  Even – or should I say especially? – if they belong to someone else.  I am so thankful for her help!