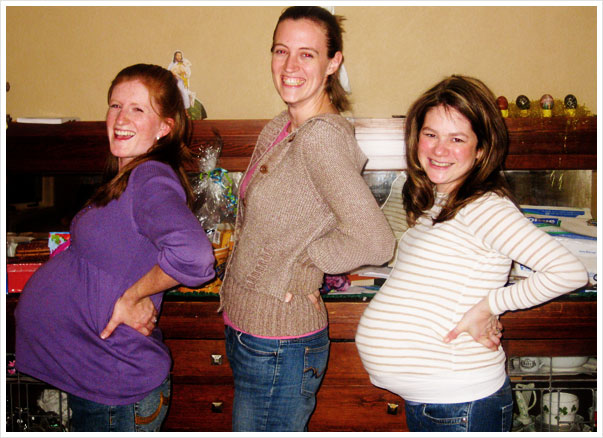 These are our friends, Bridget and Taryn.  Bridget is due the 17th of May with another little boy.  She and her husband Al farm an hour out of town and are always fun to have around. Bridget is a California-by-way-of-Ohio-girl and also half Latino.  I know, right?!?!  Taryn is NOT pregnant.  She was slightly concerned that by posing for this picture, people would assume she was “joining the club” as it were.  As much as she wishes she was joining Bridget and me at the moment, she’s got her hands full with Max, her darling babe, and a move to MN.  So I repeat she is NOT pregnant.  Just want to make that clear (that’s for you, Taryn!).

We took this photo at a going away dinner for Paul and Taryn.  You know my feelings about pregnancy pictures, but I like how this turned out.  And I like the marking of the momentous occasion.  I hope someday Bridget and I can show our kids these photos and laugh with them about “way back when.”

I also like the change the photo marks with the move for Taryn and Paul.  Don’t get me wrong, I hate that they are moving away from us.  Taryn is a youth minister – she even has her degree in it and isn’t a poser like Jac and I! – so she “gets” how we feel about youth.  She’s also terribly sweet and funny.  Paul likes Guiness and has a dry sense of humor.  Do I need to say anything more for you to like him because those are selling points for me. And they love the show Chuck as much as we do.  Who will watch it with us now?

No, I don’t like that they’ve left.  But I do love that they’re moving someplace where Taryn gets to be a stay-at-home mom and, hopefully, be pregnant again.  (But she’s NOT pregnant now, you understand.)  So I like that the above photo marks that step for them and catches Bridget and I on the verge of change, too.

I’m not one for changing.  It messes with my planning ability and causes me to move beyond my comfort zone.  It makes me sick to my stomach just thinking about it.  For this reason, I can’t think too much beyond labor and delivery.  I have a vague, fuzzy notion that our lives are about to change, but I can’t wrap my head around it.  It’s been this way with all of the kids and I’ve survived all three times.  It’s the not knowing how or when that is hardest to bear.  Almost like glimpsing a shadow of something moving through the woods; that same thrill of excitement and fear and anticipation is how I feel at the moment.  You don’t know if you should run faster to see what it is or run away because it might eat you.  And I always put my money on the getting eaten. You see my problem?

Now that I’m officially “past due,” (makes me sound like a late payment, doesn’t it?) those emotions are magnified even more.  I find myself longing for that change and forgetting to savor what is in front of me right now.  Soon there will be six of us in this house.  Soon I will have someone else between Jac and I in our bed.  Soon there will be diapers and burp cloths and another name to attach to the right person.

But tonight there are five of us sleeping soundly under one roof.  It won’t be long until we wake up for another day and all the changes it has in store for us.  Those changes I can handle.  WILL handle. Just like we’ll handle the change of this baby, big and small, when it FINALLY decides to arrive.

P.S.  Taryn is not pregnant.  I’ll let you know when that changes.