The only thing Philip loves more than the Yankees is his “blankie.”  Have I mentioned this before?  It is a necessity for sleep and comfort and his favorite thing to do is feel it on his skin.

Ironically, it’s not even his blanket.  When I was expecting Max, Chrisa and Sarah – my college roomies – made a quilt in expectation of the new babe.  Bright and colorful with VW Beetles as a nod to my first car, it was great and we used it frequently with Max.  But it was just a blanket to him.

Then Philip came along and around his second birthday, decided that the quilt was HIS.  Soon he would not part with it and it became his “blankie.”

He has loved it to pieces – literally.  The corners have split open and the edges are thread bare.  It is stained with blood in  places (this isPhilip we’re talking about!) and the binding is permanantly discolored.  He lets neither Max or Tess touch it and while he likes the feeling of it straight from the dryer, he must be the one to put it in the wash to make sure it’s handled correctly.

I think he loves it even more than he loves us.

It has also been quite obvious that he’s had a tough time adjusting to life with Ellie.  He’s been stand-off-ish and slightly jealous.  I’ve been praying he’d come around.

This afternoon, I witnessed the transformation.

We were working on a puzzle when Ellie started to cry.

“Well, I think she’s tired and trying to go to sleep.”

He frowned, obviously thinking.  “Maybe . . . maybe she’d like my blankie.”

I tried to stay calm and not seem overly enthusiastic with the idea, letting him make the call.

“Maybe, buddy! You could try.”

He disappeared and returned shortly with the blankie, lip sucked in and thinking hard.  He stood looking at Ellie for a moment and then, ever so gently, laid the quilt on top of her.

Wouldn’t you know it?  She calmed right down and was asleep in a matter of seconds.

“She likes it! She likes my blankie!”  He was so pleased. 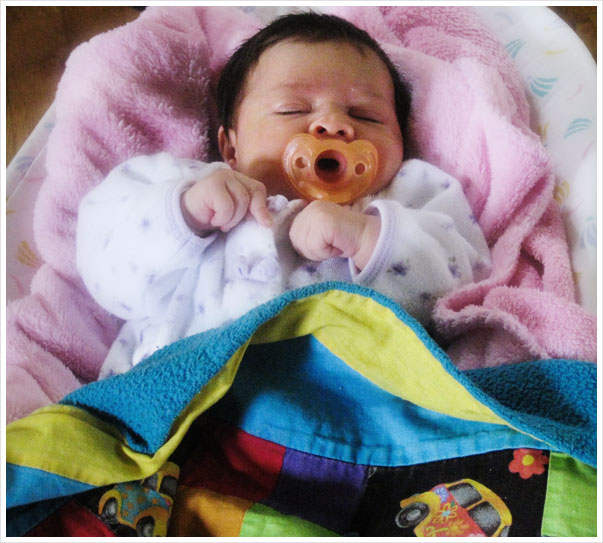 My heart swelled with pride and love for my boy.  He didn’t even look back , but continued with the puzzle.

Later, during supper, she fussed again.

“Maybe she wants my blankie again.  She likes it.”  And really, it does seem to work like a charm.

I knew he’d come around sooner or later, but I NEVER expected this.  The blankie given to comfort the baby?  THAT’S a serious seal of approval.  And love.