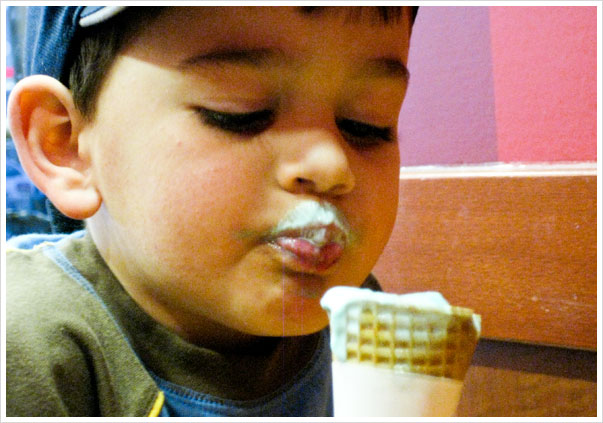 You know that Family Circle cartoon?  The one where something is broken, the mom is standing over the situation with hands on hips and the kids are shrugging their shoulders saying “Not me!” while a little spirit named “Not Me” is running happily away?  We have a rash of that here at the house.

Except in our case, the blaming only comes from Philip and the person at fault is always Tess or Max.

I mentioned his incident on the grass last week and it seems to be getting worse.

I’m not really sure what the point is for him to deny culpability when I’m standing right there watching.  He’s too smart to think I’ll just go with his accusation and apprehend his sibling.  He’s also too smart to think he won’t end up with the wrap.  It’s a mystery to me.

At any rate, today he came up with a winner.

It was gorgeous out and while Max and I worked on school, he and Tess wrapped up their lessons early and headed outside to soak up the sun.  The dining room opens up onto the deck and on days like today, bugs or no, we just leave the sliding glass door open.  It helps me to hear things.

Like Philip coughing until he gagged and then retching in the yard.  Max and I looked at each other.

“That doesn’t sound good!” Max said.  I agreed and was about to get up and investigate when Philip showed up on the deck, eyes watering and wiping his face on his arm.

“Yeah.”  He sounded annoyed, almost as if it was a ridiculous question.

“What?”  Okay, sometimes he sounds dumb, but he’s not.

“You coughing!  What happened?”

“Oh!  Tess put water in my mouth” he said accusingly, glaring at his sister.  She DID look guilty and slightly nervous.  But it sounded like she was trying to drown him which was not a possibility.

“Yes.  Water she got from the car [their toy coupe].  And she made me put it in my mouth.”

“Um, no one can MAKE you put water in your mouth, bud.  You know you’re not supposed to drink water from outside.” **

In the moment I didn’t know whether to gag or laugh, so I went with laughter.  And then got him some water.

I hope this is just a passing phase and not a life long pattern.  I don’t relish the thought of having “I did not inhale” or “It depends on what your definition of “is,” is” conversations with that kid.  Meanwhile, I am totally blaming this behavior on Jac because it’s not me.

** This is not the first incident with unsanitary water.  Just days ago he was caught imbibing from the sandbox.  Sick.  Yes, we do give them plenty of liquids – their Nalgene bottles are always accessible to them.  But for some reason, this kid (whose list of foods he’ll eat is only 10 items long) takes great joy in trying dirty water.  So far, his system has stood up to the challenge.