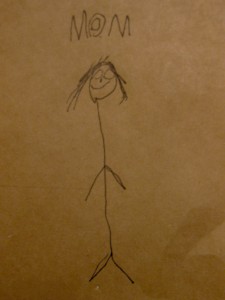 I am especially fond of this recent portrait by Max because of how svelte and tall I appear.  However, I imagine I seem tall to just about anyone three feet and under.  Anyway, it is also helping me deal with the inevitable feeling of huge-ness that comes with being this far along in pregnancy.

This time I have been the most cavalier and (I daresay) healthy with my changing body.  But other’s reactions have been the most brutal this time around.  For the last 2 weeks countless – I’m not exagerating, I’ve totally lost count it’s happened so many times – people have asked when I’m due followed with a smug smile and a hearty, “It’s any day now, I’d bet!!!” only to have their jaws drop and eyes bug out when I tell them THE LAST DAY OF APRIL.  Sometimes they’re struck speechless.  Other times they say stupid things like, “Well, you look like you’re ready to go!”  Uh, thanks?

Last week, Max spent the whole morning refering to me as “Big Fat Mama.”  He kept hollering, like a town cryer, “Make way for Big Fat Mama!”  or saying to his siblings, “I don’t know.  Let’s ask Big Fat Mama.”  I finally said that it hurt my feelings and that I’d wish he’d stop and he just laughed merrily.  But then when I laid down with him during rest time, I found that the blanket couldn’t cover us both.  “I guess I am a Big Fat Mama . . . ” I chuckled.  “That’s what I’ve been saying!” he said.  I almost rolled over on top of him.

The final blow came today from Philip.  As I made lunch for them he said, “You know mom, you don’t look long and skinny.  You look very short and fat.”  I told him thank you and considered showing him the above drawing as proof that someone does indeed think I am long and skinny, but decided against it.

I sat on him instead.