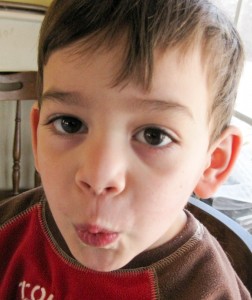 I’ve been pondering as of late how Philip projects himself into nearly every situation.  It’s always about him.  Books, magazines, signs on the road, songs – all we hear is ” THAT is me!”  or “Where am I there?”  I don’t remember Max going through this “me” stage and most of the time it’s rather comical.

Then this morning came.

I’ve mentioned here before that Philip doesn’t really sit in chairs.  He perches and climbs and hangs on them, sure, but sit?  Not so much.  This has resulted in his head being split open and several bad bruises from rough falls.  And if that wasn’t enough, he acts the same way around the couch, the rockers and the little kid chairs in the living room.

This morning it was the pew.

That’s right, we have a pew in our front room.  We stole it from the Newman Center when we left.  We joke it’s our ruler; we want a “pew-ful” of kids and it’s here to let us know when we’re done.  Most of the time it’s one long storage spot for crap.

Anyway – Philip and the pew.

He was chatting, as he does, while Max was also chatting to me while I read the paper.  Then we heard giggling.  Then the giggling got nervous and the nervousness turned into a yelp.  We looked over to see Philip’s feet and ankle’s trapped in the top of his GeoTrax train depot (about 7 inches off the ground) and his hands firmly planted on the edge of the pew.  The depot and his feet were sliding away from his upper body rather speedily and he was panicking about what to do about it.  His body stre-e-e-e-etched.  Finally, he managed to get his hands down on the ground and back them up so that his butt was in the air.  The whole while the depot was sliding across the room and he was “Ah!!! Ah!!! Ah!!!”-ing.  He really din’t know whether to laugh or cry until he had ended up with the depot stuck up against the wall and his head was on the ground and he was dangerously close to doing a sommersault and no where near getting his feet free.  That’s when he cried.

Now, some of you may see this as cruel – me watching this play out and then writing about it (hello, Mom!).  But here’s the deal.  It really happened rather quickly, it was very entertaining, (if I had had the camera close I would’ve got a picture) and I was hope, hope, hoping for a lesson to be learned.  I can only tell him to sit down, get down, or stop climbing so many times.  He’s a try-and-see kind of kid.  Evidently he was trying and I was anxious for him to see that standing on stuff isn’t wise.

But you know what happened instead?  My self-absorbed love sobbed into my belly and then yelled passionately,

“I don’t like that thing!  Never buy me any of that stuff ever again!  I’m never gonna play with it anymore!”

Because, obviously, it was not his doing.