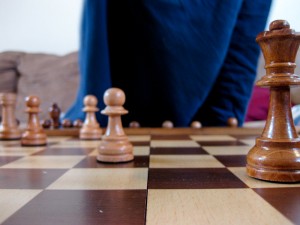 Cousin Chad would be so proud.

Chess has over-taken the house.

Okay, maybe not the house so much as Max.  Jac has been so good about bringing out the board periodically and Max has always been interested.  But sometime this weekend it became his new thing.  They played four games one evening.  Max played game after game against himself, nearly missing lunch because he was so preoccupied.

After a few close calls, Jac whispered to me that he needed to start learning some strategy because Max was getting good.

Then all afternoon Max was asking Jac when his book was coming.  I had no idea what either of them was talking about (I was a little distracted today) but when I got home tonight, I saw the said book.

“How to Beat Your Dad at Chess.”

I’ll let you know when it happens.