Here in the frozen north, anything over 50 degrees feels downright balmy.  Mama Syd was amazed (and a little shocked) when she saw barefooted children washing cars last Saturday as there was still snow on the ground. But it was 55 and rising!  The sun was out!  There was a whisper of a breeze!  All of it hinted at spring.

The kids spent a good deal of time out side this week, soaking up the sun and the nice weather.  Because of this, they were much nicer to be around (in my estimation, anyway).  There is just something about that fresh air.

Some days were warmer than others, but no matter the temp, Philip insisted that he didn’t need a sweatshirt and if we did convince him to wear it, the sleeves were pushed up past his elbows – very Breakfast Club-y.

Then the first day of spring arrived gloriously on Friday.  She did not disappoint.  Out came the bikes, a trip to the park was planned, doors were left open.

The most fabulous of all?  It’s hard to see, but that is GREEN GRASS behind the boys.  GREEN GRASS!!!!  If that isn’t a harbinger, I don’t know what is.  And it’s springing up all over town.

All over town except at our house, that is.  It remains a barren wasteland. 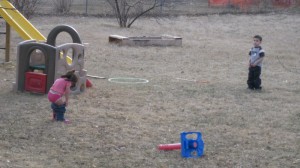 Yesterday was even warmer and more beautiful than Friday.  So when Jac decided to BBQ some brats (which I first boiled in Guiness.  That smell is what heaven smells like, mark my words!) – our first BBQ of the year – Max asked if we could eat outside.  Great idea! 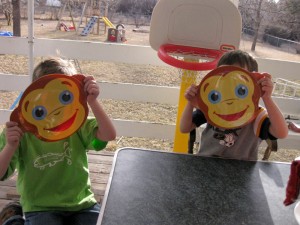 We were all a little excited, as you can tell by our smiles.

And anxious for our food.  I tell you, it smelled soooooo good.  It was hard to wait.

Everyone was giddy and goofy.  But when Max decided to recreate the newest prayer Jac has tried to teach them – complete with hand motions – things got really crazy.  And funny.

To see Max being crazy and hear my uncontrollable laugh, check out the video link above.  It’s good stuff.

What he’s saying is “In Due Season.”  The line from the prayer reads, “The eyes of all hope in you, Lord and you give them food in due season.”  Apparently, this is the only part that has stuck with him.  That and the jazz hands . . . (Jac thinks it is helpful for the kids memorization of prayers if there are hand motions involved.)

This statement – in due season– prompted a discussion about what it meant.  We responded with timeliness, at the right moment, when needed, etc.  It got me to thinking about how God indeed sent us this weather in due season, just when it was best.  How he sent Mama Syd to visit and get the baby stuff ready, in due season.  And how this baby will come, on God’s time, in due season.  He is soo good.

*** As I write, a storm is whipping around the house.  A blizzard is predicted for the next 2 days with temps bottoming out by Thursday.  We’ve been watching the lightning and listening to the thunder.  “Thunder Snow” is what the Lakota call this occurance – the mixing of winter and summer happenings.  It is their harbinger of spring.  It is good to know that the warm weather is not gone for good or for long, but will return again, all in due season.