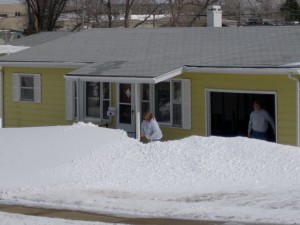 This is our neighbor’s house just as the sun broke – 36 hours after we had last seen it.  Yesterday and last night were crazy with sideways snow, hail, thunder and lightning and blackouts.  And though I was glad we had no where to go or to be, cabin fever set in quickly for the kids which was slightly unpleasant.

But today broke with a light snow and by 10:17 am there was bright sun.  By lunchtime, there were bare patches in our back yard and by 6:00 pm I could see the grass in most of the neighbor’s lawns (not the guy’s yard in the photo above.  He must’ve been in the worst place for the drifting . . . ).  How fickle the weather is.

They cancelled school yesterday and today (homeschoolers don’t get snow days, just so you know) and the northern hills won’t have school on Wednesday either.  I thought we were prepared for a long winters night, but as I inspected the fridge and pantry this morning, I found we were wanting one ingredient for each meal I could make.  Bummer.

Jac – because he’s a saint and was suffering from cabin fever himself – gallantly offered to go to the store to do our grocery shopping if I would make a list for him.  As much as I hate menu planning, I was overjoyed he would do this for me.  Grocery shopping should be added to the list of “banes”.  Don’t get me wrong, I love finding a good deal and look forward to hearing how much I’ve saved at the end.  But the actual shopping, loading, unloading and then the putting away???  Ugh.  I’d rather eat glass.

So Jac deserves a crown, a drink, a day off, SOMETHING, because not only did he brave the roads and crazy crowds to go shopping for me and remember everything, he came home and PUT IT ALL AWAY.  I love that man.

(He said the store must have had a leak because the produce area was completely cleared out and there was absolutely no bread to be found.  He’s a hero, that guy.  And next time we’ll go before the storm.)