Philip had 3 birthday parties to mark his fourth year.

Yes, it was worth it.

His “Baseball Party” with four little amigos was a sweet and calm affair. 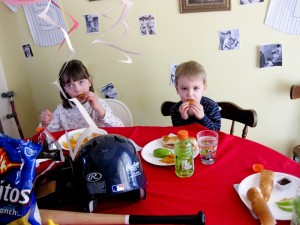 We served a “ball park” lunch of hotdogs, doritos, apples and gatorade.  Delish. 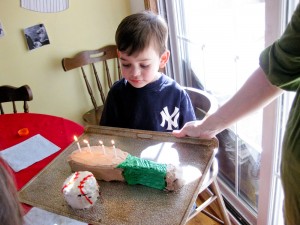 The the bat cake.  He’d been asking for one for weeks.  Oy.  I waited until the morning of to get to work and it was too long.  As the kids scarfed their lunches, I was frosting like a made women.  Then the cake, this cake, slipped off the counter, making a bee-line for the floor.  Thanks be to God for the impending baby and the resulting belly which caught the cake and also insured that I did not go ballistic because the bat had broken in half.  Yay for pregnancy hormones!  Jac laughed, I snarled something about hating my kitchen, then pieced things together just in time.  No one was the wiser. 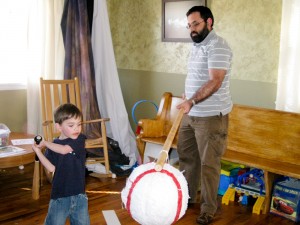 What is a fiesta without a pinata?  (A darn good party, I say, but the kiddos think otherwise.)  How brave were we (and by “we” I mean Jac, of course.  I stayed hidden in the kitchen for most of the demolition.  Pinatas stress me out.) letting them use a real baseball bat? 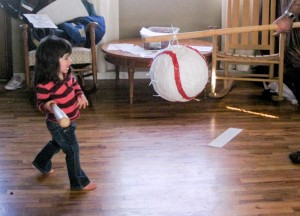 We laughed and laughed at how sissy-ly Tess swung at the “Puhl-lotta” (her term).  She’s had tons of bat time and could clock her brothers with it if needed, but she turned into such a priss in front of everyone. 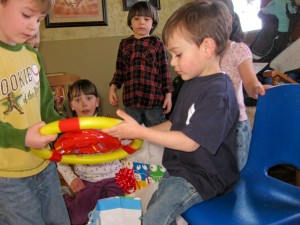 Opening the gifts!  I love how excited everyone always is about the process.  Oh, to be young again!