Those that know Philip, know he has a hard time sharing.  For those of you who have never met this sweet child, don’t hold it against him.  He’s a #2 and was therefore born with an inferiority complex.  My grandpa Bill, himself the second son, understands this completely and makes sure that Philip has lots of new things that he doesn’t have to take as seconds from his brother.  Or share.

This is all well and good except it does not inspire much virtue.  Especially lacking are charity and self-control which I tend to believe are kind of necessary for a happy life.  Who’s with me on this?

No, he’d rather be stingy and territorial and miserable.  Honestly, a well planned fit with piercing wails, indignant accusations and a good, hard cry are much more appealing to him then begrudgingly letting his sister have a turn.  Or letting his dad wear his jammies.

Yep.  You heard me right. 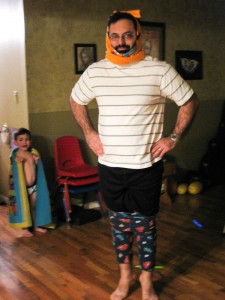 You can see his distress in the background.  Even his blankie does not make amends for this slight.  “THOSE ARE MINE!!!” he wailed.

The latest was last night and his refusal to let Tess onto his bed.  Max had constructed an especially cool fort by hanging their heavy fleece blankies down over the rails of the top bunk, thus hiding the bottom bunk.  SOOO cool.  But Tess wanted access and her bouncer of a brother refused.  And then pitched a fit when she muscled her way in.  He was given the choice of banishment for the night to Mama Syd’s room (their name for the guest room) withouthis blankie – unheard of!!! – or letting Tess onto his bed.  He chose Mama Syd’s room.  That stubborn heart!  He cried for a long while, hiccuping and listing Tess’s trangressions, but after 20 minutes, agreed that she could stay, but he wasn’t happy about it.

I was thinking about it some more today and shaking my head in judgement of his silly decisions to be unhappy.  And then I thought of all the choices the Lord gives me to be selfless and giving and how hard that is.  How often I choose to list another’s unworthiness or my own right to something and choose to stay miserable instead of doing the hard thing.  Ugh.  I resolve to be a better example to my second born, whether he’s aware of it or not.

And we’ll keep forcing him to share.  Sometimes I worry that he’ll grow up to be a selfish poop-head who refuses to share because he always had to in a big family.  But I console myself with the thought that I’d rather he choose that miserable road – Lord save him from that! – than never learn to share in the first place.  That’s the wisdom I’m hoping for, anyway.