Where has the time gone?  Was it really 4 years ago that we rejoiced at the arrival of a second son?  Time flies when you’re having fun (or having babies, one on top of the other).

Anywho, today we did it up big.  The day began at 6:30 when Tess woke up rather freaked out at the decorations that we had stealthily placed in their bedroom while they slept.  This snowballed into, “Philip!  It’s your birthday!!” and then everyone was awake. 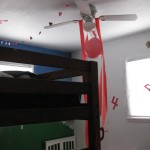 Their room with fabulous decorations. Very scary (for Tess). 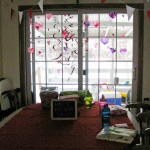 The dining room – the boys were very concerned that things be decorated “right.” 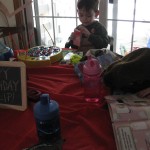 Phil with his loot 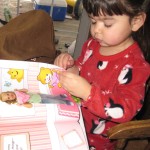 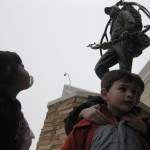 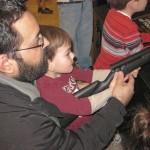 Where they got to shoot laser guns and watch prairie dogs explode in simultation. Sweet. 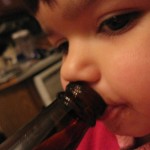 We came home for pizza and naps. Pizza was had. Naps were not. Tess takes the edge off at supper. 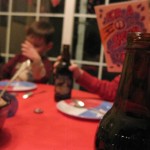 Supper included root beer, chicken on a stick, white rice and apple and blueberry salad – as per Phil’s request 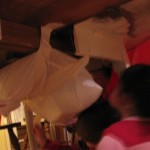 “My horn can pierce the sky!” 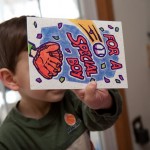 This year was all about the baseball

Cake with Mama Syd and Papa Chris on the Web Cam. Blow, boy! 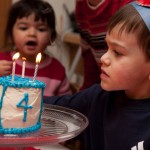 What the??? Relighting candles – Philip was unimpressed, but Tess was wowed. 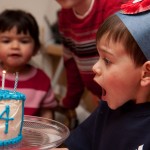 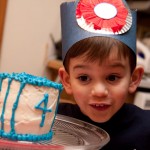 Thanks be to God the candles are gone!! 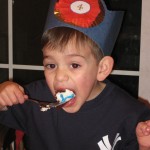 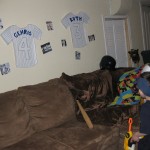 Then downstairs for the “Extravaganza”! We decorate according to movie theme – this year was Everyone’s Hero with Yankee decor 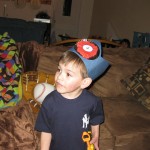 Soaking up his “Baseball Party” 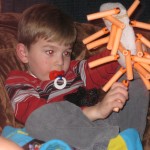 I was most impressed with the kid’s sense of what needed to happen today.  Birthdays were such a big deal for me growing up, I wanted to pass that on to our children.  Today it was clear we had because we heard a lot (read= too many) of reminders about what needed to come next.  And little things that were insignificant at the time, have taken on a new importance.  The “Extravaganza” that took place last year was a last minute effort to make the most of a birthday for Philip when everyone was sick and we had given up TV for Lent.  A movie seemed like a perfect solution.  Add twinkle lights, some decorations, tickets and popcorn and viola!  Extravaganza!!  Now, this is a Daniel family birthday expectation.  I’m glad we’ve got tradition.