Oh How the Years Go By 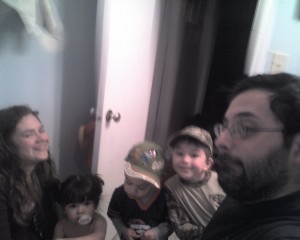 Today marks a decade Jac and I have been together.  I’m a little undone at the thought.  Not because, ‘Ugh.  Ten years??  Seriously, feels like thirty!” but because, “Can it be?”

The boy I was smitten with ten years ago looks nothing like the man I know now (we attribute it to my good cooking and a penchant for caramel apple empanadas . . . ). Honestly.  That kid was undecisive, liked the edge, wanted a working woman and maybe one kid.  He wanted fame and fortune, maybe as a musician, maybe as a photographer.  He was an “artist.”  He struggled for hours to build a mock website.  He could only cook mac and cheese and spent long hours in bars filled with smoke to play music for intoxicated college folk.

Ten years later and I love him.  Truly, truly love him.  I thought I knew what that meant then, but it takes time and sacrifice and work to really know the meaning of love.

Now . . . now he’s a man of conviction, prayerfully executing decisions, working hard so that I may stay at home with our children.  The four of them!!! (And let me tell you folks, he wants to take over the world with our offspring.)  He still likes the edge – he’s running his own business and we’re free-for-all homeschooling, after all – and that makes him exciting; I never know what will happen next.  He has left behind the dreams of worldly fame and fortune for a treasure around our table.  And really?  He’s pretty famous in the world of Church website design, but he wouldn’t tell you that even if he did believe it.  He still picks up his guitar from time to time, and from time to time I still hear chords from “Weezer” or “The Violent Femmes” (they take me right back . . . ), but the rest of the time it’s praise and worship and silly songs for his children.  I get all woozily watching him at work behind the lens of a camera.  He’s an artist, to be sure.  This morning as I type, he’s churning out several websites, all at once, for clients who have come to him.  And thought he may get frustrated, the ease with which he handles this work and his creativity show the depth of his knowledge.  He is a master in the kitchen and some of our best times are making meals and treats together.  But he still makes a mean mac and cheese!  Gone are the days of smokey bars . . . he prefers the wild and crazy fans he has here at home.

And there is no way I would know and understand the depth of love a husband could have for his wife or she for him.  Over and over again, Jac has laid down his life for mine, in big ways and small.  The thankless jobs, the sleepless nights, the hours of labor so we might see our children – all for me.

I wouldn’t trade it for all money can buy.

14And over all these virtues put on love, which binds them all together in perfect unity.

Let the peace of Christ rule in your hearts, since as members of one body you were called to peace. And be thankful. Let the word of Christ dwell in you richly as you teach and admonish one another with all wisdom, and as you sing psalms, hymns and spiritual songs with gratitude in your hearts to God.  -Colosians 3:14-16