The Eighth Day of Christmas

We woke up a little groggy from our late night and hurried to meet Leslie, Lily and Aaron for breakfast at McDonalds.  Not exactly super tasty but there was a play place.  !!!!  And it was really cool!! (according to Max.)  It was good to get to know Aaron a little better and catch up with the honeymooners.  We’re so happy for you guys! 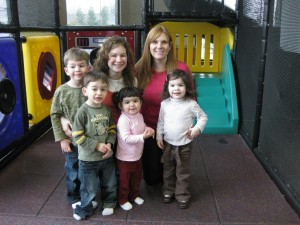 Lily is two months older than Tess – check out those legs on that gal!!  We’re hoping that they’ll be good friends like their mama’s are. 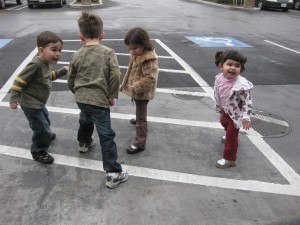 Getting ready to race in the parking lot because where else is better?

When we announced it was time to go, our kids gave a groan of disappointment.  “So you want to play for 5 minutes or go home and see Uncle Billy right now?”  “Go see Uncle Billy!!!!” was the chorus and they had their shoes on in no time.

They spent the morning getting reacquainted and taking shoulder rides on their Uncle.

Then he and Jac went and got us lunch.  From here: 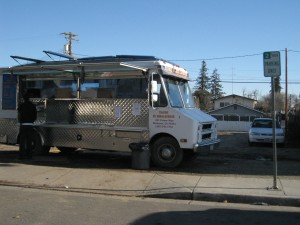 For those not in California, this is a Taco wagon.  Salida – a tiny town – boasts at least 4.  And they are always hopping.  Billy loves them and when he lived in CA frequented them on a daily basis.  But me?  I had a bite from one when I was in middle school then saw a caravan pull into a goat farm once upon a time and have abstained from this culinary adventure ever since.  However, Jac was interested and I can’t resist my brother’s peer pressure so it was burritos for lunch for everyone!  I cannot deny that it was delicious and spicy – Mexican food at it’s best.  But later, all three of us were holding our bellies and groaning and somewhere a Taco wagon owner was laughing.

Later, there was some chiropractic work performed. 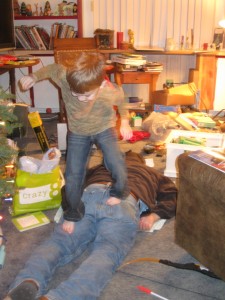