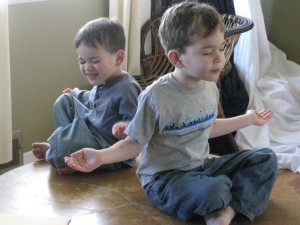 The photo above is:

a. a Charismatic prayer experience

b. how we play hide and go seek

c. an imitation of a hindu statue

d. the boys practicing being Yoda

How did this happen?  This frenzied, foaming-at-the-mouth obsession with all things Star Wars.  We dig the movies, don’t get me wrong (gotta give props to the home town boy, George Lucas). I even saw a midnight showing of the release of the Phantom Menace (thanks, Gagon’s, for that cultural experience).  But what Max has become, I cannot comprehend.

It started with a vile Happy Meal toy (how I hate them!  Enough to write a whole post, but I won’t . . . ) from the new Star Wars cartoon.  Now, because we’re on the T.V. wagon, we haven’t heard anything about this stuff.  But Max was interested.  This led to Jac showing the boys a trailer for the silly thing and BAM!  They were converted.

Seriously, Max especially is a hard core neophyte.  He can’t get enough and everything revolves around Star Wars. As a result, I am now totally worthless to him as I know little to nothing of the Star Wars minutiae he is interested in. During an outing that was just the 2 of us, he finally sighed at my lack of knowledge and asked, “Who would know these answers?”  When I admitted that Susan would, he made me promise to ask her the names of all the movies in order, when she first saw them (our response of  “When you’re older”  to his pleas to see the films obviously was too hazy for him.  He needed an age!) and the name of the “big round circle ship.”   That evening, at supper with her, I asked away and took notes and Jac and I sighed our own sighs when she admitted she viewed the first Star Wars movie in the theater at age 5.  We did not pass that along to the Max man.

In the morning, he woke up, asked what was for breakfast, announced he didn’t like it and said, “Do you know the names of the Star Wars movies?  You don’t, do you?”

He wasn’t as impressed as I thought he would be when he did.  Tough one, he is.  I pray he uses the force for good, not evil.